Home » Angelina Jolie Arrives In Tokyo With Her Crew!

Angelina Jolie was all smiles as she arrived in Tokyo on Saturday with four of her children; Pax, Shiloh, Vivienne and Knox. 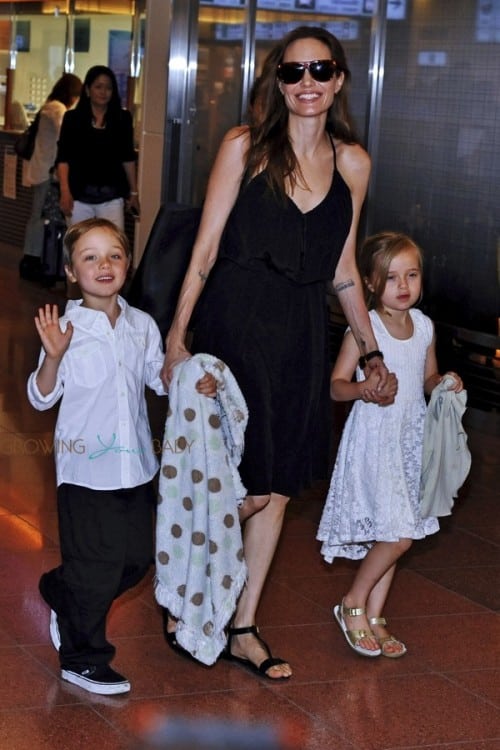 The actress made her way through the airport holding on to each twin, while the Shiloh and Pax walked a head with security.

The family is in Japan ahead of the premiere of Maleficent, which also features her daughter Vivienne(right, above).  Angelina’s other two kids Maddox and Zahara were not along for the trip, but that may be because they accompanied their parents on a trip just a week ago.

Between promoting her projects, and her duties as United Nations Special Envoy, Angelina is often photographed boarding a plane on all continents.  This past week she visited Thailand on behalf of the United Nations High Commissioner for Refugees to visit the Ban Mai Nai Soi refugee camp, where she viewed living conditions and spoke with the locals.

It is not known if her kids joined her in Thailand or if they were re-united shortly before the jaunt to Japan.  One thing is for sure.  They have seen more of the world in their short lives than many of us will in total, which is pretty amazing for them.