Home » Are Airline Seats Too Small For Infant Carriers? 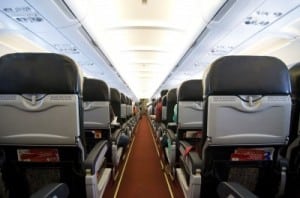 Melissa Bradley, 39, bought a separate seat on an airline flight for her infant and carrier. However, she found herself booted off the plane when the seat was too small to fit the carrier in safely.

Bradley and her 1-year-old daughter were kicked off the United Airlines Flight 75 at San Francisco International Airport on Wednesday after a problem with the small size of the airline seats. The narrow economy-class row was too small to fit her daughter’s carrier safely. Leaving the family with no way to travel safely.

The airline has a different story, however. They claim that Bradley was disruptive on the flight and that lead to her removal from the airplane.

“The customer refused the flight attendant’s numerous attempts to accommodate her and the infant seat that unfortunately would not fit her assigned seat,” according to an airline statement supplied by Johnson. “The captain elected to have the customer and her party removed after she became disruptive, interfering with the crew’s ability to prepare the cabin for a safe departure and taking pictures of other customers on board, even after they asked her to stop.”

This is not the first time something like this has happened to Bradley. Only days prior, she had the same problems making her infant carrier fit in the seats of an Skywest flight from Aspen, Colo., to San Francisco. On that flight she was not removed.

By law, airlines must provide space for infant safety seats to fit. If the seat does not fit, the family should have been moved to another section of the plane that would have been better able to accommodate the carrier. Bradley says no offers to help were given by the airline and its attendants.

“The airline had the responsibility to move them — with the same class of service — and that’s where United failed,” said Kate Hanni, founder of FlyersRights.org.

After being removed, Bradley and her family were rebooked onto another flight. The second flight had seats far enough apart to fit the infant carrier in the seat. The infant seat, a Graco Snug Ride, is approved for airline travel. According to Bradley, she has flown with her children for years without any issue until now.

“Honestly, this was the last thing I wanted to have happen on that plane,” Bradley said. “I begged them to accommodate me.”