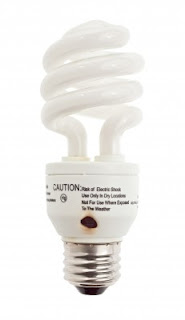 A couple years ago we changed all of the light bulbs in our house to the CFL fluorescent bulbs that were advertised to use a fraction of the energy. I was happy with them until one night my husband and I smelled something burning – really burning. After scouring the house we realized that the smell and a lot of smoke was coming from our front door light fixture. Once we got the bulb out and safely in the garbage I sent my husband out to get regular bulbs to swap out all of the CFL ones. The whole thing freaked me out and it appears I’m not alone.

Many others who have experienced the ‘side effects’ of these bulbs when they blow are speaking out about the possible hazards.

A couple from Windsor recently had the same thing happen as I did except the bulb that blew in their house was in their infant’s nursery. Upon removal of the bulb they also found that the base was blackened, which caused them to call the fire department.

While assistant chief fire prevention officer Shawn Boutette said they should air out the house well, he also commented that this is not an isolated experience.

In 2007, the Electrical Safety Authority(ESA) issued a product safety alert about compact fluorescent lights because of increasing reports from consumers about what happens to the bulbs when they reach “end-of-life failure.”

“When CFLs fail they may emit smoke, an odour, or a popping sound, and the plastic base may become discoloured, charred or deformed,” the ESA stated.

They went on to say that while ESA cited certification agencies who advised such signs of failure do not present a hazard for approved products, they are concerned that it can be difficult for consumers to distinguish between what is normal and what may be a precursor to fire or some other hazardous condition.

Additionally, it has been found that these bulbs contain approximately 4mg – 5 mg of mercury per bulb. Something that can cause many problems when inhaled, and can affect our brains, spinal cords, kidneys and livers.

To me, our health is worth more than this. Now we conserve in other ways to make up for using regular bulbs. At least I know that if they blow, I’m not going to need to call in a hazmat team to ensure our house is safe.