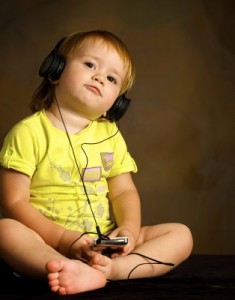 According to a researcher from the University of York, babies respond better to music than they do to ordinary speech. These tiny dancers move to the beat more than anything else.

Marcel Zentner, researcher and University of York psychologist in England, studies 120 babies as they listened to music on their parents’ laps. Professional ballet dancers rated the infants based on how well their movements matched the music, speech, and recorded rhythms they listened too. The babies moved their arms, legs, heads, and bodies to the beat of the music played far more than to the sound of speech.

Zentner feels this research shows that infants respond more to the beat than the melody of the music being played. He also found that when infants were able to match their bodies’ movements to the beat of the music they smiled more and seemed happier.

What this study means is not yet clear. Researchers are not yet certain why humans evolved an ability to move to the beat, or why infants show this ability at such a young age. There are a few theories being looked at as to why this is.

“One possibility is that it was a target of natural selection for music. Or that it has evolved for some other function that just happens to be relevant for music processing,” Zentner said.

The results of this study was published in the March 15 issue of Proceedings of the National Academy of Sciences. – Summer, staff writer