Home » Babies That Were Switched At Birth Re-united

Never doubt a mother’s intuition.  Maria Lorena Gerbeno started to wonder if the daughter she was handed at the hospital was hers after many of the facts staff gave her didn’t add up.

The new mom was told after her c-section that her baby weighed 6lbs 8 ounces.  However, when they handed the newborn to her staffers at the clinic said that the infant weighed nearly 8lbs 4 ounces and claimed that she was delivered through breech birth.

‘I told them that could not be but they said I must have misunderstood. I never got any answers,’ Mrs Gerbeno recalled.

“That day, when I woke up from a nap, I woke up crying, distraught, knew that was my daughter and not the one in my arms “.

The feeling something wasn’t right persisted, but as luck would have it she ran into another mom Veronica Tejada at the clinic when the two came in for a checkup. 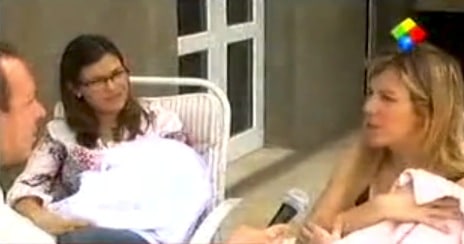 During their conversation the pair realized that the birth weights of their newborns matched to the ounce.

In total 5 babies were born at the the Sanatorio Argentino, a private clinic in San Juan on September 3oth; 2 boys and 3 girls.


Maria and her husband filed a criminal complaint to begin legal search of their true daughter. After a judge ruled that DNA tests should be performed, it was found that the babies had been switched and plans were initiated to return the right child with their families.

With the help of therapists both families prepared for the switch back. 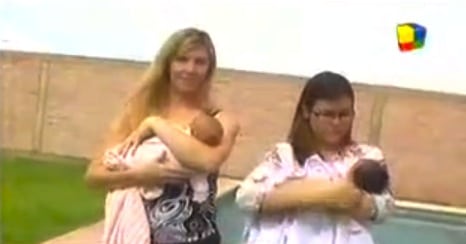 “We talked on the phone and exchanged photos online,” Gerbeno said.

“Not my daughter, but I breastfeed and care twice, I feel like I have twins.  I love her a lot. I love her. I hope her mother will(sic) allow me to keep seeing her when she is returned. “

After it was revealed that they were at fault, the hospital issued this statement(translated),

“Having taken a case linked to the identification of the newborn occurred in our institution and with the aim of informing the community as well as accompanying and solidarity with the families involved, we acknowledge(sic): The identification procedure of the mother-child, at birth, is based on normed standardized processes and are institutionally and maternity nationwide that aim to ensure the identification of patients. Our institution is collaborating with all the necessary and required by the agencies involved in order to clarify what happened, assuming full responsibility accordingly. Since its inception in 1974, the Sanatorium Argentine community is committed to the San Juan and certify our protocols work through quality organizations for over 12 years “.

Both families are now considering legal action against the hospital.