Home » Baby Boy born with Bundle of Nerves on his Back 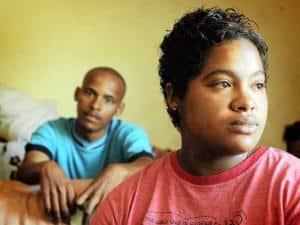 On January 23rd when Mershell Wallace gave birth to a baby boy, both doctors and the mother were stunned as the infant appeared to have a conjoint twin on his back. But surprisingly, the mass is not a partially formed limb of a twin but bundle of nerve tissues.

During all her ultrasounds, Mershell’s pregnancy appeared to be normal. But when she gave birth to baby Joshua in January, doctors realized there was something protruding from his spine.

“It didn’t show up on my ultrasound,” she said. “Even when Joshua was born, I thought it was one baby. The doctors immediately said “there is something on his spine”.

The mass had a limb like appearance therefore medics believed initially that it could be a partial limb of a conjoint twin. But more tests showed that it was actually a complicated mass of nerve tissues.

Baby Joshua was born premature at 33 weeks at Groote Schuur Hospital in Cape Town. He has been named after his grandfather Joshua William Wallace.

He is now being treated at the Red Cross Children’s Hospital in Cape Town. But it is going to be a complicated surgery which will finally help the baby get rid of the protrusion on his back.

Thankfully, according to the doctors, the mass of nerve tissues are not attached to any vital organs and are also not causing any pain to Joshua. He is currently being given antibiotics for possible skin infections.

A multidisciplinary team of doctors are set to perform the operation but the date is yet to be decided.

“It will most likely be a series of surgeries as the boy gets older,” said Red Cross communications officer Lauren O’Connor-May. “It is a complex situation because the mass is living and shares nerves with the infant.”

The Wallace family has a history of twins. Earlier Mershell miscarried twins and her husband Marco has five set of twins in his side of the family. But Mershell says she did not feel like twins this time around.

Mershell said: “This pregnancy did not feel like twins, but it looked different.”

She has two other kids aged two and six.

Currently the most challenging part for the couple is visiting the hospital daily to know the progress. Both are unemployed and have been borrowing money for the taxi fares.

“We were given R100 by social workers for taxi fare, but that is the first money we have been given by them. “I have been going to the hospital often,” Wallace said, adding that she was feeling quite overwhelmed by it all.

The parents hope their son will be fine soon.