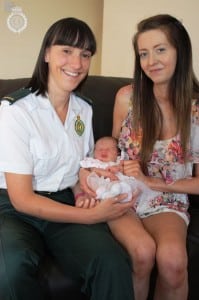 When parents are not sure what to name their children sometimes they find inspiration in interesting places.  For new mom Melissa Cavanagh that spark came from her daughter’s birthplace – the elevator in her building!

When Melissa went into labour with her third child last Friday she and her partner called emergency crews to help.

The family’s flat is on the ninth floor so the ambulance staff had decided not to use the stairs but the elevator.

Paramedic Nikki Wildman accompanied Melissa as other ambulance staff and the baby’s father Paul Yeomans waited for them to come down to the main floor to be transported to the hospital.

But suddenly the lift carrying the two broke down.

Nikki, says that initially she was not worried when the lift stopped.

“We called up the ambulance control room to request the fire services assistance and waited. About 20 minutes later, we were all still in the lift when Melissa’s contractions started to get a lot closer together.”

It was then that both knew that the delivery was going to happen right then.

“We all looked at each other because we knew the baby wasn’t going to wait for the lift to be repaired.”

It took the firefighters almost 45 minutes to get to those trapped inside. Meanwhile the 6lbs 1oz baby girl had already arrived!

“Neither of us like lifts at the best of times so when it got stuck we panicked.,” said Melissa.

She said ambulance staff had calmed them down, and added: “We thought it only appropriate to make Ella’s middle name Nicola, after all the work that her namesake did to deliver her.”

Baby Ella Nicola therefore will always remember her place of her birth and the person who helped deliver her.