As new parents, we trust the hospital to deliver our babies and help keep them safe and healthy until it’s time to go home. One Minneapolis mother had her trust shattered after hospital staff placed her baby into the wrong bassinet in the nursery, after which he was delivered to the wrong mother and breastfed. Because of the mix-up, Tammy Van Dyke’s little boy, Cody, will need to undergo a year of medical testing for HIV and hepatitis. 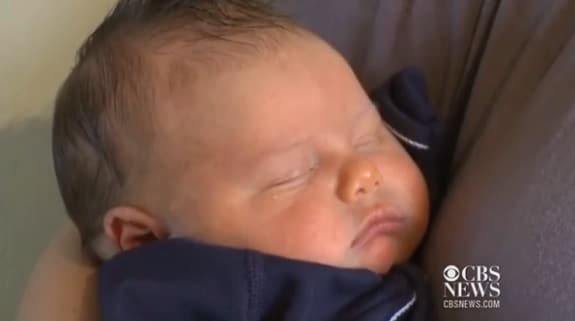 “You put your baby in the nursery, not even 48-hours old, and you think they’re safe, Tammy told ABC News. “I’m holding it together. I’m just in disbelief, and it was like I was in a dream, a bad dream, and I couldn’t get it to stop.”

Tammy was told by hospital staff that the switch happened just hours before she was supposed to take her son home. Right after the switch, Cody received blood testing for HIV and hepatitis. While those initial tests came out clear, the hospital staff at Abbot Northwestern Hospital said that her son will need to continue testing every three months for the next year.

“It was horrible,” Tammy said. “Two nurses had to go in through veins in his tiny little arms.”

Gloria O’Connell says that the continued testing is being done as “a precaution,” but no other comments have been made about the mix-up by the hospital because of patient confidentiality.

Tammy says she was able to calm down a little after being able to speak with the mother who had accidentally breastfed Cody, especially after she learned that the hospital had difficulty in locating the other mom’s baby, Liam. According to Tammy, it took the staff another 20 minutes to locate Liam.

“It gave me peace of mind to talk to her,” Tammy said. “She was just as distraught as me that this happened to her, and in the meantime, also didn’t know where her baby was. She had twins.”

But despite her “peace of mind,” Tammy said that Cody’s homecoming fell short of her expectations.

“I imagined getting up and getting ready and having Cody in the car with his brother and coming home as a happy family,” Tammy, who also has a 2-year-old, said. “We were going to videotape the homecoming, showing his room, and I couldn’t stop crying. I couldn’t put myself together, because it wasn’t what I had imagined all this time.”

To try and make up for the mistake, the hospital staff gave Tammy an apology letter and offered to pay for all of Cody’s testing over the next year.

“Please accept this letter with our sincerest apologies for what occurred today at the hospital, that in the nursery, your newborn son was placed in the wrong bassinette and then was taken to the wrong mother and breastfed,” the statement said. “The hospital agrees to pay for the additional testing that you had done today and will also pay for the tests recommended for your son related to this incident up to one year.”

“As an obstetrician, I have personally seen verification of the infant’s identifying name band matched correctly with the mother’s on hundreds of occasions. It is extremely unfortunate that was not the case this time,” Dr. Wheeler said. “We sincerely apologize to the involved families and will make certain we understand why our procedures were not appropriately followed in this case.”

While Tammy didn’t comment on the apology, she says she just wants the entire thing to be over.

“I will be thankful to God when this year’s over and he’s cleared all his health tests and we don’t have to think about this again,” she said.