A recent study conducted by researchers from Cambridge and Southampton Universities in England, and published in Pediatrics, found a direct link between a mother’s activity level and the activity level of her child. 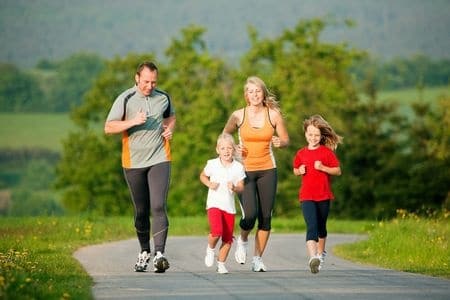 The study, which used heart-rate monitors and accelerometers to measure activity levels in 554 4-year-olds and their mothers, suggests that the more active a mother is, the more active her child will be. Participants wore the monitoring devices continuously for up to seven days, including during sleep and while participating in water-based activities.

“The more activity a mother did, the more active her child,” Kathryn Hesketh, the study’s co-leader and a current research associate at the Institute of Child Health at University College London, told BBC News. “Although it is not possible to tell from this study whether active children were making their mothers run around after them, it is likely that activity in one of the pair influences activity in the other.”

Children are not “just naturally active,” according to the study, and helping children develop healthy exercise habits early in life can help them stay active through adulthood. Additionally, because many mothers’ activity levels fall well below recommended levels, the study concluded that policies designed to improve children’s health through increased activity should be directed at mothers.

Hesketh told BBC News that for every minute of moderate-to-vigorous activity a mother does, her child was likely to engage in 10 percent more of the same activity. When mothers were sedentary, children were also less active. Over time, the differences in activity levels can become significant.

Many women are less active after becoming mothers, due to the demands of motherhood, the study recognized. Other factors that influenced mothers’ activity levels included working outside the home and whether or not her child had siblings.

“There are many competing priorities for new parents and making time to be active may not always be top of the list,” Hesketh told BBC News. “However, small increases in maternal activity levels may lead to benefits for mothers and children.”

Small changes in physical activity – such as making a commitment to walk or move around for a few extra minutes each day – can be very beneficial, particularly for very young children who are in the process of developing coordination and motor skills, according to Dr. Ann Hoskins, director of children, young people and families at Public Health England.

“Active play is an important way to develop coordination and motor function skills in the pre-school early years and there are lots of activities like parent and toddler swims, buggy fit and baby gym which provide opportunities for mums to socialize, be active and support their child’s development,” Hoskins said.