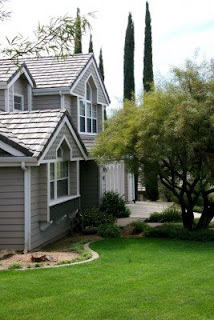 When Jessica Higgins woke up yesterday morning, she probably had no idea that by the end of the day she would be a mom and that the baby would be delivered in the middle of her front lawn!

But that is exactly what happened.

The California mom had just arrived home from the mall, with her 2-year-old still sleeping in the back of her car, when she realized she was in labor.

Even though the brave mom had called 911, her new baby was already out when police arrived.

“She was just standing in the driveway rocking the newborn, who was still attached to the placenta,” Officer Manny Ramos said Wednesday.

The proud mother, who was recovering at a hospital Wednesday, said “everything happened so fast.” She said she had her son’s portrait taken at the mall earlier in the day and was on hold with the doctor’s office when the baby started pushing.

Mary Claire, born at 5 pounds, 11 ounces is said to be doing fine.