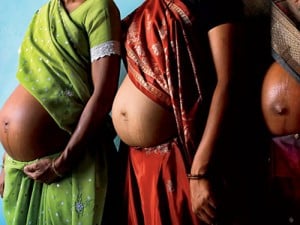 Six years ago, Canada outlawed the “renting” of wombs as well as the buying and selling of human eggs and sperms. Despite this ban, the surrogacy business is flourishing with couples looking to other countries for surrogate moms. However, the act is not without controversy.

Called “baby farms”, special houses inside the Indian state of Gujarat contain a group of women with one unique bond. They are all surrogate mothers for childless couples around the world. Many couples from Canada have turned to these types of businesses in order to have children that are carried and delivered by other women.

The women in the house all live together, eat meals together, and can take classes together to learn skills such as sewing and cooking. For their time and efforts, each woman earns around $7000. In poverty stricken areas in India, this can be an amazing sum of money to have. Women can buy their own houses, start businesses, and provide for children they already have with the money they earn by carrying children for foreign couples.

For couples looking to hire a surrogate in India, the Surrogacy Abroad Inc. company offers an all-inclusive package that features psychological screening of surrogates and exit visas for the babies. The cost for parents is $36,000. The cost may seem high, but in countries such as Canada, couples can face fines o up to $500,000 and 10 years in jail for using surrogate mothers in their own country.

Called “reproductive tourism” by some, couples have traveled all around the world to find ways to have a child. In poor nations, such as India, surrogacy is a growing business. Other couples have traveled to Mexico, Argentina, Spain, Romania and the Czech Republic for invitro fertilization techniques. In these places, the cost can be lower for couples to pay. Reasonable prices, even in the baby industry, are often sought out.

“Frankly, ever since the laws in Canada came into existence, egg donation in Canada — in Montreal at least — has ground to a virtual halt,” says Dr. Seang Lin Tan, an internationally regarded infertility expert at Montreal’s McGill University. “We have about 50 patients a year who can find their own donors — friends or relatives. But the majority can’t find donors and for those who can’t find donors we send them abroad.”

Surrogacy in the US, the closest country for couples from Canada, can cost $100,000 and more. Turning to other countries is becoming more and more popular. However, the practice is not without its critics. Some worry that women in these countries are being exploited and used by couples in richer areas. The term “baby farms” is used among those who see this practice as similar to the large scale factory farms for animals. Women are kept as wombs, rather than as full human beings.

“What bothers me so much is that we’re totally commercializing, depersonalizing and de-humanizing the most intimate of human relationships, that of parents and children,” says Margaret Somerville, founding director of Montreal’s McGill Centre for Medicine, Ethics and Law.

Despite these critics, many feel the practice is a good thing. Women are able to earn a substantial amount of money from the process, money that they can use to create better lives for themselves and their families.

Some countries are concerned that this practice could become yet another way for the poor to be used for the benefit of the rich. Somerville helped to draft the Declaration of Istanbul, a world declaration from leaders of many scientific and medical fields calling for an end to organ trafficking and transplant tourism. Surrogacy, Somerville says, would fall into this issue.

She says, “What comes first is, how much money can you make out of this? And just like the reproductive tourism industry, it’s the poor people who get used and the rich people who buy.”

Raywat Deonandan, former scientific adviser to Assisted Human Reproduction Canada, agrees. He feels that once we begin paying for human tissue, it becomes a slippery slope into an ethical dilemma. In some areas of Indai, surrogate women can face social stigma and become ostracized for doing this. During pregnancy, many women are kept isolated from their families in these homes, and rarely receive postpartum care after a surrogate pregnancy.

Of course, some couples are staying within their countries to find donor eggs and surrogate parents. A small black market has crept up withing Canada, with couples turning to the internet to find help. The payments are usually in cash and kept under the table, and there is no oversight to keep the surrogate and the clients safe. Too often, couples or the surrogate end up cheated or mislead with these types of situations.

“Because it’s a black market, you’re not getting a 32-year-old who is sitting in her kitchen and has a couple of toddlers when it occurs to her that she’d like to help her fellow man by donating eggs,” says Hanck, of the infertility awareness association.

As the global reproductive industry continues to grow, and black market surrogacy slips through the cracks, many are concerned about the ethical issues this brings. – Summer, staff writer