With award season is high gear, Celebrities were dressed to impress as they walked the red carpet at the 74th Annual Golden Globe Awards held at the Beverly Hilton hotel on Sunday January 8, 2017.

Some of our favorite celebrity parents were spotted on the red carpet enjoying the night out with many of their A-list friends!

Jessica Biel and Justin Timberlake laughed as they posed for the cameras. The actor was nominated for Best Original Song for his hit single “Can’t Stop the Feeling” from the animated movie Trolls. 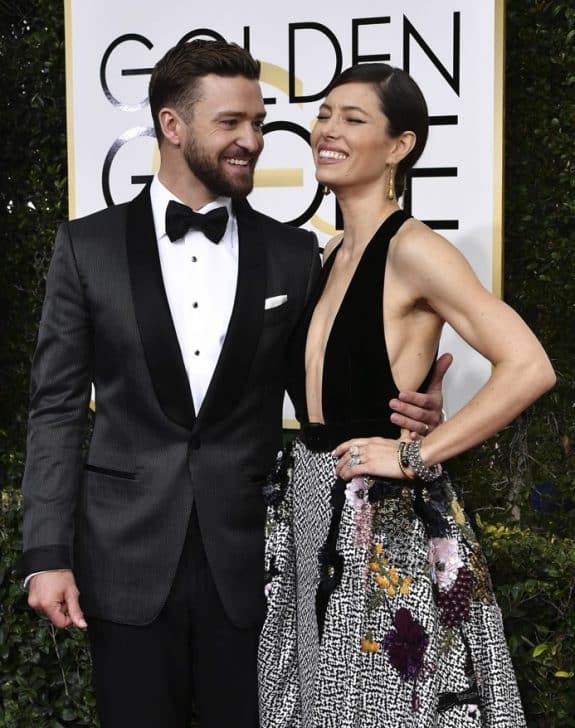 Reese Witherspoon was beautiful in a yellow custom Atelier Versace gown with a high slit that showed off her perfect pins! 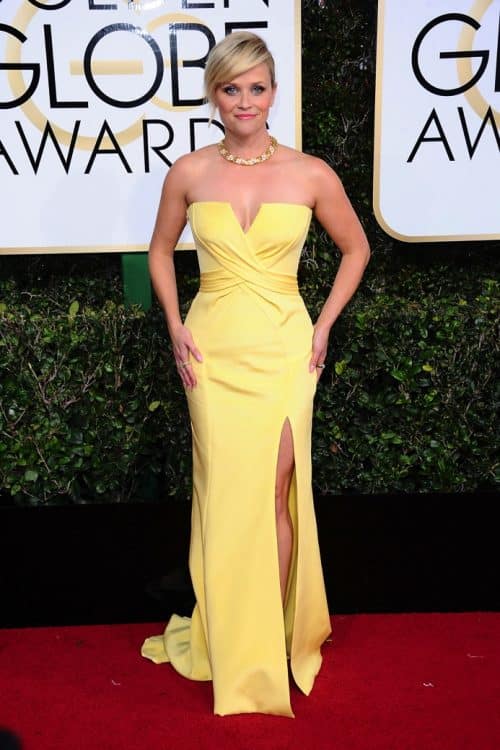 Thandie Newton was pretty in a white Monse dress with bronze sequin detail along the bottom.  The actress was nominated for Best Performance by an Actress in a Supporting Role in a Series for her role in Westworld. 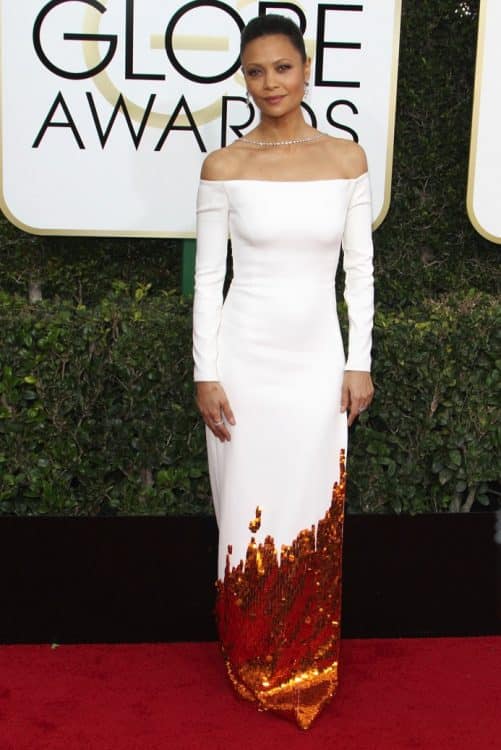 Besties Michelle Williams and Busy Phillips walked the red carpet together. Michelle, who was nominated for Best Performance by an Actress in a Supporting Role for Manchester By The Sea, wore a strapless Louis Vuitton Lace gown. 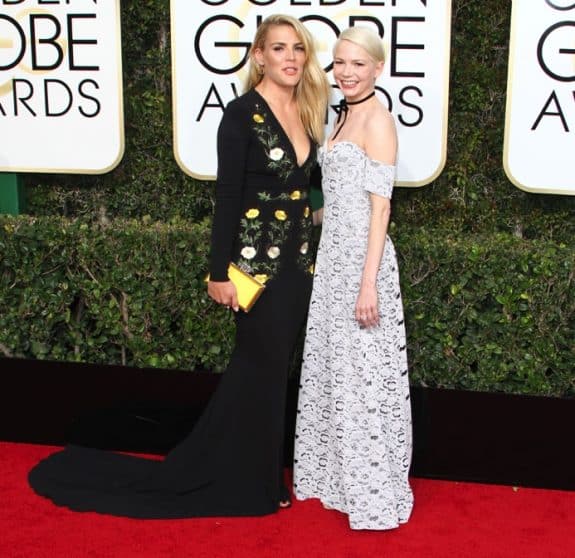 Drew Barrymore dazzled in a plugin v-neck Monique Lhuillier gown that was accessorized with Harry Winston Jewelry and Stuart Weitzman shoes. The actress was on hand to present an award. 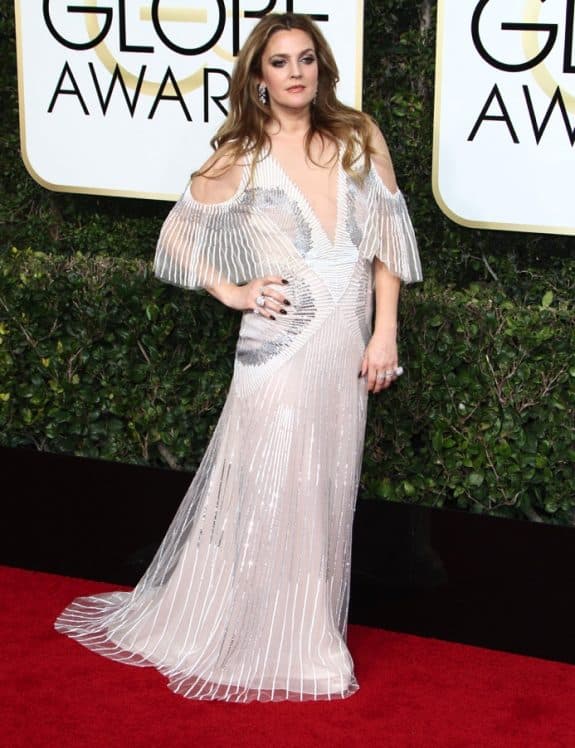 New mom Blake Lively turned heads in an Atelier Versace gown with long flowing train, gold neckline, and matching cutouts the actress used as pockets.  The actresses husband Ryan Reynolds was nominated for Best Performance by an Actor in a Motion Picture Musical or Comedy for his role in Deadpool. 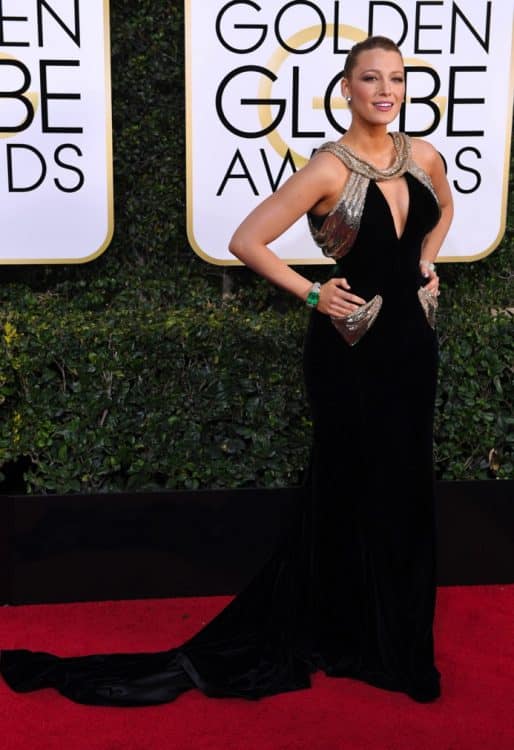 Acknowledging it takes a team to make her look red carpet ready, Blake shared a photo of her getting reading for the big night.

Kristen Bell, who was on hand to present an award, looked sharp in a Jenny Packham gown and Harry Winston jewels.

“We’re going to play Settlers of Catan at 8 o’clock p.m.,” Shepard told People.com when asked what he and his wife would be doing after the Golden Globes.

“We have a strict 8 o’clock start for game night tonight,” Bell added. 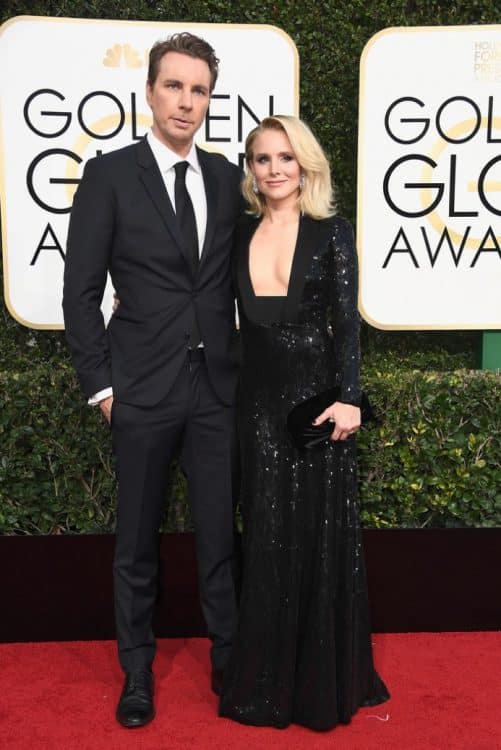 True to their word, the actress shared a photo of the pair playing the game just after 9pm LA time.