An Ottawa-area family continues to defy the odds on multiple births without aid from fertility treatments by producing twins and triplets over two generations.

This unusual family tree began in 1990 when Laurie and Pat Scissons had twin boys, Kenny and Robert. Less than two years later, the family welcomed triplets John, Ryan and Scott.

Their family doctor says it was a “one in a million chance” to have both twins and triplets without fertility treatments being involved.

Now the next generation is extending the streak.

Laurie and Pat’s 24-year-old son Scott and his girlfriend Emma Timmens just welcomed their new set of twins, Emett and Warren. Because these babies are identical, their proud mom thinks it may be a “fluke” since it doesn’t follow a genetic path. 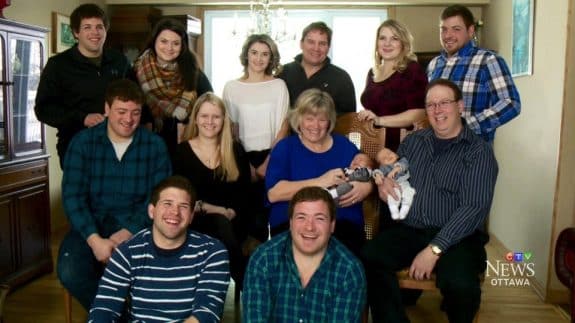 Multiple Births Canada reports that approximately 6000 sets of twins are born annually in Canada, and estimates that a combined 100 sets of triplets, quadruplets, and quintuplets are born each year.

That organization also estimates the likelihood of a multiple birth for a Canadian couple is 3.2%. That number reflects just how unusual this family’s streak of twins and triplets really is, making what happened to them a statistical anomaly.

The Scisson family isn’t done yet.

On the horizon there is more baby excitement. Triplet son John and his fiancee Amanda Hempill are expecting in June. They’ve had an initial ultrasound that shows just one heartbeat. Amanda is hoping for a girl to break the long string of “boy births,” but laughing admits that a girl would be outnumbered.

Don’t bet against them. Everyone in this family understands that the unexpected might, and often does, happen.