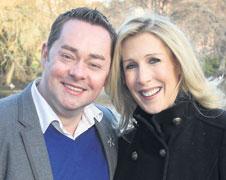 Television chef Neven Maguire and his wife, Amelda, expected to welcome their twins, Connor and Lucia, on Valentine’s Day, but things haven’t gone quite as planned. They have had more than their fair share of scares during what is normally a joyous event. Thankfully, it looks like everything just might turn out okay.

It all started when Amelda was taken to the hospital a week before her planned caesarean date (Feb. 7th) because of high blood pressure. The next day, the twins were born, making them four weeks premature. Connor was fine. Lucia wasn’t, however, and she was sent to the special care unit and the family was temporarily separated.

“Lucia, at just under six pounds, was a pound lighter than Connor when they were born,” Neven said. “They were about four weeks premature and Lucia didn’t really take to the bottle. That’s why she was put into special care, to build herself up and get used to the bottle.” 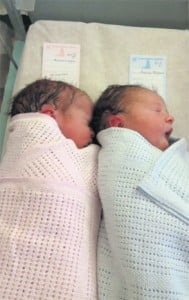 Two days later, Amelda started to complain about not feeling well, but at the time, doctors saw no reason to be concerned about her condition. By last Sunday, however, her condition had worsened.

Neven was working at the restaurant in Cavan, helping with the Sunday lunch, when he received the news about his wife’s condition.

“We were all in a shock. It was so sudden. I was so upset,” said Neven. “It was an extremely worrying time, not just for me, but for the restaurant staff and the customers who learned about it.”

From that moment on, he was almost exclusively by his wife’s side.

“I was in the hospital most of the time, and that’s about an hour’s drive from our home,” he said.

Doctors diagnosed Amelda with a condition that affects only one in 25,000 women – cardiomyopathy – a heart condition in which the heart enlarges and the muscle can no longer pump blood to the body as well as it should. It can affect people of all ages, it is mostly inherited and it can be brought on by adrenaline or hormones. There is no cure for the condition, but it can be treated.

“It is a hormonal thing. She really couldn’t breathe, she was very sick. One midwife told me that it was 15 years since she last dealt with that kind of complaint,” Neven said about his wife’s decline and condition.

Thankfully, it looks like everything will be okay. Amelda is being monitored by hospital staff and is on medication to help with her condition. Lucia has been reunited with her twin brother and the happy family spent most of last week together. Proud papa Neven was even able to capture a photo of the four of them last Friday.

“Now Amelda and the twins are doing really well. Wow! Life does not get any better. I hope to have them all home next week,” Neven said.

We are so glad to hear that Amelda and the twins are recovering and doing well and hope that the family can all be back home, together, very soon.