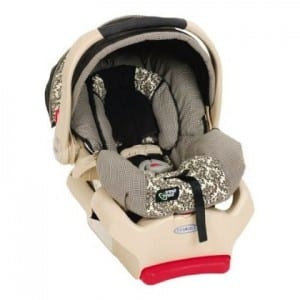 Parents of a toddler with skin disfigurement have filed a suit against Graco Children’s Products and Rubbermaid claiming chemicals from their infant carseat was the cause.

Mark and Natalie Stevens of Fairfield, Ohio claim that the chemicals used in the Graco infant carseat was the cause of the permanent depigmentation in their daughter’s skin. The toddler girl, who was born in 2007, has several large white patches of skin across her legs, back, arms, head and face. The lawyer for the couple says these patches are a direct result of exposure to the Graco Safe Seat used by the child.

A study at the Philadelphia University found elevated levels of formaldehyde and other toxins in many brands of children’s clothing and carseats. Formaldehyde is often used as a wrinkle reducer in fabrics. The U.S. only has voluntary industry standards on the use of formaldehyde as there is currently not enough research on the possible health effects from exposure to this and other chemicals.

A doctor for the Stevens cared for the toddler and alledges that her skin issues are a result of exposure to the carseat. The parents say they tried several changes in diet, clothing, and detergent before discovering the carseat as the source of the rashes that their child was experiencing. Unfortunately the skin damage was done and could not be resolved. The Stevens returned the infant seat to Graco once they felt it was the source of the problems.

Graco has indicated that they no longer have the infant carseat in question and no formal comment has been made by their lawyers about the case yet.

Mark and Natalie Stevens are asking for $100,000, plus attorneys’ fees and court costs. – Summer, Staff Writer