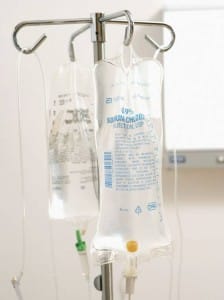 In a tragic turn of events, one baby has died, and 14 others are in a critical condition in the UK after they were poisoned in NHS neonatal care units. A health alert issued on Wednesday alerted that the tragedy occurred because of a contaminated batch of IV drips that infected the infants.

The cases of the affected children have emerged so far in six different hospitals but the contaminated nutrition drip is believed to have been used in 20 hospitals across the country. The first case arose at the Chelsea and Westminster hospital on Saturday and later other London hospitals began reporting similar cases. Initially it was believed that the contamination could have been due to beddings that were locally sourced, but when cases began appearing on Monday and Tuesday from other parts of the country, it was suspected that the cause was something else.

The officials say that the 14 infants who have suffered blood poisoning are currently responding to antibiotic treatments.

According to reports last Thursday some incidents occurred at the London manufacturing plant owned by ITH Pharma Ltd. which affected the liquid feed produced that day. Authorities are now investigating the exact cause but they think it was an accidental contamination, and not an act of sabotage.

The IV bags that could probably be contaminated have all been recalled and authorities also noted that it was unlikely that any of the bags were still in use because the batch has passed its use-by date.

Showing concern about this grave incident pediatric doctors on Wednesday said the contamination was “every parent’s worst nightmare”. They added that urgent actions were needed to improve the safety of processes to produce such formulas that are almost a baby’s lifeline.

The blood poisoning was caused by a common bacterium known as Bacillus cereus. It develops quickly and symptoms are seen very early therefore the authorities say that apart from the known cases, there might not be any other incidents as that would have been apparent by now.

The 15 babies that did get infected were all in the neonatal intensive care units, already fighting against odds from their premature birth.  The newborn who died was at the Guy’s and St Thomas’ Hospital.

A spokesman for Guy’s and St Thomas’s Trust said,

“All babies on the unit are being screened for the bacterium as a precaution and enhanced infection control measures have been put in place to prevent any further cases. These enhanced measures will remain in place until the trust is satisfied that no other babies are at risk.”

“When a medicine makes patients sick, it is everyone’s worst nightmare. This contamination incident seems to have been detected quickly but, tragically, not quickly enough to save a life lost. Having stopped the outbreak, the next priority will be to understand how it came to happen and ensure it cannot recur.”

Public Health England (PHE) and the Medicines and Healthcare Products Regulatory Agency (MHRA) have launched an investigation. Now all neonatal units across the country have been asked to recall any liquid feed from the same batch.

The pharmaceutical company ITH Pharma based in London, was founded by Adam Bloom and Karen Hamling, both trained pharmacists. They issued a statement on Wednesday through their lawyers.

“very saddened to hear about the death of a baby in hospital, and that 14 others are ill with septicaemia”.

“ITH Pharma is a specialist manufacturer of parenteral nutrition, which is given to babies in neo-natal intensive care units. The products in question, which are no longer in circulation, are made to order for individual patients on a daily basis, in response to bespoke orders from hospitals.

“We are co-operating fully with the MHRA in the investigation, and are doing everything we can to help them establish the facts in this case as quickly as possible.”

The bacteria in question is a commonly found in dust, soil and vegetation. But in pharmaceutical manufacturing units where special precautions are taken to avoid any kind of contamination, the presence of such a microorganism is never expected.

“We have sent inspectors to the manufacturer’s facility to carry out a detailed and rigorous inspection and we have ensured that the potentially affected medicine is recalled.”

Dr Susan Hill, a consultant paediatric gastroenterologist said, “This is a life-saving treatment for babies who are born very prematurely or with a severe gut problem. Any challenge to their immune system can be life-threatening.”

It is only hoped that no other babies are found to be infected, and the 14 who are still struggling to survive get better very soon.