The British Dragon Boat race in Exeter, Devon, on Sunday took a dramatic turn when the stroller of a one-year-old baby girl accidentally rolled into the river. Fortunately, a passing rower and the baby’s mother saved the girl from drowning in the nick of time.

51 year old Victor Martinez from the British Dragon Boat Racing Association was rowing his boat when all of a sudden he heard a mother’s scream. He realised that a baby girl’s buggy had just slipped into the water causing the panic.

The mom of the baby had immediately leaped after her. Victor jumped into the waters and lifted the child’s heavy pram to the surface. Two other men believed to be Stuart Mensies and Andy Travers also helped pull out both mother and baby safely to the quayside. 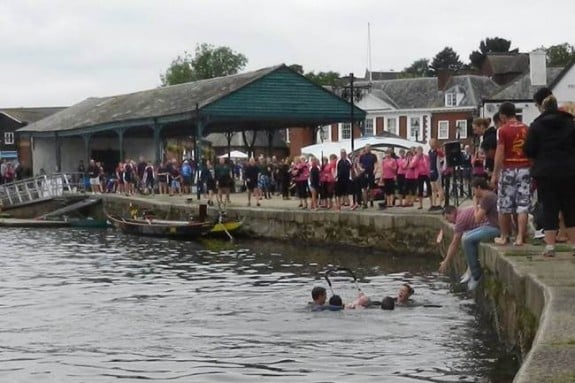 On recalling the incident Victor said that he jumped without thinking twice.

“I didn’t think about it, I just ran and dived straight in the water. I think I hit the water at the same time as the buggy. I didn’t think twice. The buggy was sinking quickly and I dived down to get under it to try push it to the surface…I was struggling to keep the buggy at the surface when I saw the girl’s face for the first time – she was screaming and crying.”

He added that looking at the baby gave him the added courage to save her.

“I looked into her eyes, which were full of river water, and just thought that she wasn’t going to drown today.”

The rower surely won many hearts on Sunday for his courageous act.