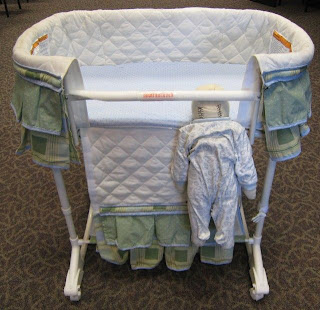 The U.S. Consumer Product Safety Commission (CPSC) is urging parents and caregivers to stop using convertible “close-sleeper/bedside sleeper” bassinets manufactured by Simplicity Inc., of Reading, Pa. CPSC has learned that on August 21, 2008, a 5-month-old girl from Shawnee, Kan. was strangled to death when she became entrapped between the bassinet’s metal bars. This is the second strangulation death CPSC has learned of in the co-sleeper bassinets. On September 29, 2007, a 4-month-old girl from Noel, Mo. became entrapped in the metal bars of the bassinet and died.

CPSC is issuing this safety alert because SFCA Inc., the company which purchased all of Simplicity Inc.’s assets at public auction in April 2008, has refused to cooperate with the government and recall the products. SFCA maintains that it is not responsible for products previously manufactured by Simplicity Inc.

The Simplicity 3-in-1 and 4-in-1 convertible bassinets contain metal bars spaced farther apart than 2 3/8 inches, which is the maximum distance allowed under the federal crib safety standard. The metal bars are covered by an adjustable fabric flap which is attached by velcro. The fabric is folded down when the bassinet is converted into a bed-side co-sleeping position. If the velcro is not properly re-secured when the flap is adjusted, an infant can slip through the opening and become entrapped in the metal bars and suffocate. This warning does not cover bassinets produced in recent months that have fabric permanently attached over the lower bar.

Due to the serious hazard these bassinets pose to babies, CPSC urges all consumers to share this safety warning with day care centers, consignment stores, family and friends to ensure that no child is placed to sleep in a Simplicity convertible bassinet covered by this warning.