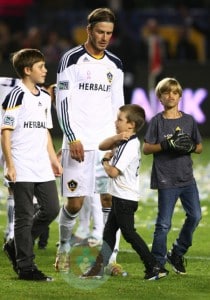 Football star David Beckham and his wife, Victoria already have four children: Brooklyn, 12; Romeo, 9; Cruz, 6; and baby Harper who is just seven months old. And while the couple is nothing short of busy, they say they would like to add more to their already large brood.

“We might have one more or two more, you never know,” David stated in an interview for Jonathon Ross’s ITV1 chat show.

But don’t worry. They’re not considering adding another child just yet.

During his interview, David shared what it’s like parenting a brood of four while each parent juggles a busy career – Beckham traveling the globe for his H&M underwear range and football career, Victoria her fashion designing and modeling. He says that, despite their busy schedule, the couple tries to do ‘normal things’ with their children.

“You know, we take them to school, we pick them up. We take them to taekwondo or wherever they go, so we always do the activities with them,” he stated. 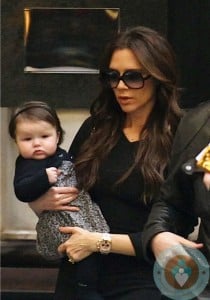 Of course, Beckham says that he does have another agenda when it comes to the martial arts trainings of his boys – protecting their little sister, Harper – the only girl in the bunch.

“I just want them to protect her when she’s at that age. At that age when she needs protecting. Cruz does taekwondo, Brooklyn does boxing and Romeo does karate, so they’ll all be ready.”

“But Cruz is the one who’s going to really look after Harper, he’s the tough one.”

So what’s it like to finally have a little girl? David says:

“Harper is seven months old now. I can’t even look at her without welling up.”

“After having three boys, you just assume that you’re going to have another boy, but when we got told she was a little girl, it was amazing.’

In addition to martial arts, the boys are very much into the sport that made their Daddy famous, and dad confesses that he has a hard time just watching his sons’ games from the sidelines.

“I was watching the kids play the other day, it was a game just before they were playing. It was the younger kids of Romeo’s club, and they’re playing in the game and there was a penalty given. And the kids are seven years old and he sent the kid off.”

David also shared how, even though their family is very happy in the Los Angeles home, they will always be proud of their British roots, even if their kids don’t always enjoy the East End delicacies.

“My children have been happy for five years there, they’re stable there. They’re loving life there. My eldest is 12 years old now, he needs stability, so we did it for that, but we also love living there.”

“But my boys, they love coming back to London, they love pie and mash. They did turn their nose up at liquor; it’s not the most attractive gravy. But it’s amazing. All the boys, apart from Cruz, have the liquor. None of them have touched the jellied eels yet!”

I can’t blame them. I don’t think I would touch jellied eels either!