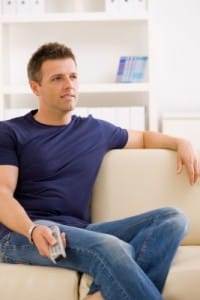 Too much television, it is known, is not good for children, but a latest research says it is not good for their father either. According to a study published in the British Journal of Sports Medicine, men who watch TV for more than 20 hours a week have almost half the sperm count of men who do not watch TV at all!

The research conducted at Harvard School of Public Health found that TV viewing cut the sperm count of men drastically.

The team however wanted to find how sperm quality was affected by physical activity of non-athletes.

The authors used data from the Rochester Young Men’s Study, which involved 189 men between the ages of 18 to 22 who were enrolled in 2009 and 2010. These men had been studied to know the affect of environmental contents on them and during the time, their diet and TV viewing habits was also noted.

On average these men had 14 hours of TV viewing in a week and eight hours of physical activity.

“I was surprised to see the strength of the association,” Chavarro said. “We expected an inverse relationship, but we didn’t know to what extent.”

The researcher points out that there have been previous studies that have looked into the relation between sperm quality and sitting in front of a computer all day or other sedentary work lifestyles, but no one has studied the affect of a leisure activity like watching TV on the quality of the sperms.

The lead author believes that the reason for low sperm count with high TV viewing is the high oxidative stress.

Many chemical reactions that occur in the body generate oxygen and these oxygen levels can damage cells such as sperm cells like spermatozoa, which develop into sperm.

The scientist thus concludes that it is an increased physical activity that can actually help improve sperm quality and sperm count.

“More exercise is better for sperm production,” he concluded.

If you are planning a family, lesser time in front of the TV is definitely better.