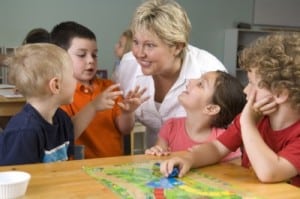 Parents who have their children in daycare know how often they come home with illnesses picked up from other kids. A new study may show that exposure to these germs early on may help boost a child’s immune system later on in life so they become sick less often.

Exposure to many germs early in life could be key to boosting a child’s immune system when they are older. A study tracked children between the ages of 2.5 years and 8 years to see how often they became sick with illnesses such as respiratory, ear or gastrointestinal infections. The initial results were hardly surprising. Children who were in large daycare settings early on experienced more illnesses and infections that those who were cared for at home. However, these children grew to have fewer illnesses as they reached school age and older.

Children in smaller daycare settings, less than 100 children, did not have more infections that those who were kept home during the early years. Exposure to large groups of children seemed to be the key to building a stronger immune system for young children.

Parents who worry about exposing their children to a wide range of germs and illnesses during the early years may not need to be so concerned. The trade off for more sicknesses at a younger age can be fewer sicknesses as the child ages.

“I hope people will not worry so much about sending their children to day care in relation to infections. Really, what we are seeing is a natural part of life when we get to large groups,” study researcher Sylvana M. Cote, a psychologist at the University of Montreal in Quebec, said. “In the long run, it shows day care does not have an impact in the long-term burden of disease. I think it is (an advantage) in terms of the academic aspect.”

The study followed 1,238 families over an eight year period to track the amount of illnesses and ages. Gastrointestinal illnesses were not spread as easily among the children as respiratory and ear infections, which may be because parents are more likely to keep children home for symptoms such as diarrhea than a runny nose. However, the repeated exposure to these infections could be helping to build a stronger immune system in the long run. – Summer, staff writer