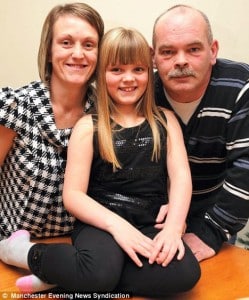 This year’s end brings news of an added bundle of joy for a UK family that was already expecting identical triplets. When Gill Holden, 35, went to the radiologist for her regular prenatal check-up, she was in for a shock when she was informed that the expectant mother had not three but four babies inside her womb – all conceived without the use of fertility treatments!

Gill, who already has an eight year old daughter Abbie with partner Marc Hanley, is over the moon with the news. But the family is also nervous, emotional and excited about the new arrivals and the amount of work they would bring with themselves. They have already planned to sell-off their two bedroom home but stay close to family.

Marc who is a self-employed painter and a decorator by profession said that they were getting prepared for the quadruplets and had already got four Moses basket and loads of nappies and wipes from the local Asda. Even Abbie is looking forward to becoming a big sister.

Doctors believe that conceiving natural quadruplets is a very rare phenomenon with chances being one in 500,000.

In Gill’s case, there are three identical baby girls and a non-identical sister and once they are delivered they will still need hospital care for at least a month. Gill who has already quite her job as a welfare assistant heading to her doctor’s advice, expects to give birth at St Mary’s Hospital in Manchester in February and medics hope that she is at least 32 weeks and the babies weigh 3lbs each before they help her give birth by caesarean section. – Atula, staff writer