The Weimer family has certainly not had it easy. The Oregon family has been faced with a number incredibly difficult situations. Ryan, and his wife, Lana, are raising two sons, Keaton, 9, and Bryce, 2, who are living with a rare form of muscular dystrophy. Their other two children have passed away from the same condition, spinal muscular atrophy. Son Eston, died at birth, and daughter Addison, mere days before her third birthday. 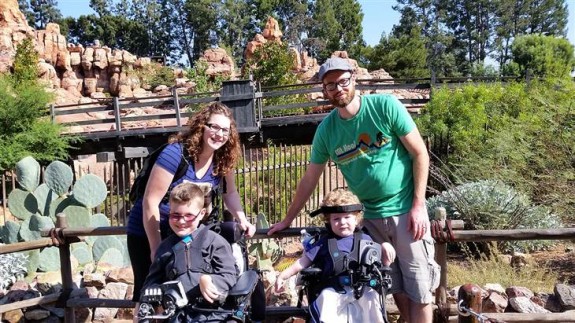 Those living with the genetic condition typically do not live past their teens, so Weimer and his wife have set out to give their two living children the best lives possible. That is why for the past six years, Ryan, a self-proclaimed “nerdy nurse with an imagination,” has been creating elaborate and incredible Halloween costumes for son Keaton, who uses a wheelchair. It all started back in 2008, when dad built a three-dimensional pirate ship, made out of wood, around Keaton’s wheelchair. In 2009, it was an elephant. 2010 saw Keaton trick-or-treating as a dinosaur. In 2011, he was a “Mighty Morphin Power Ranger,” a horse-riding knight in 2012, and in 2013, mom Lana sewed a costume for Keaton from the popular game and television series, “Pokemon.” Little Bryce isn’t into dressing up in costume just yet.

This year, however, Weimer had a bigger goal, with an even larger dream. The family began a Kickstarter fundraising campaign. They have since met their goal, and even raised four times the amount of their original goal. This incredible dad was going to build a “How To Train Your Dragon” inspired Halloween costume. The entire family visited the DreamWorks facility, where the movie was created. Weimer now hopes to create a non-profit that will allow him to not only build his elaborate costumes for his children, but for others living with special needs as well. 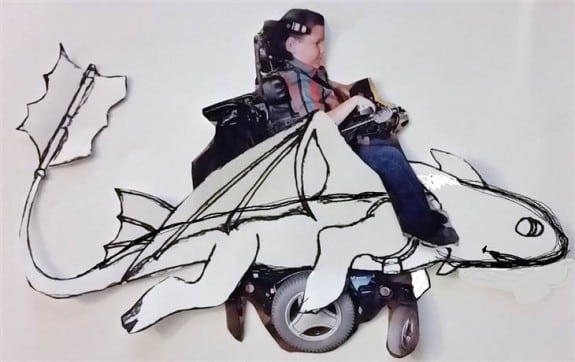 When interviewed by TODAY.com, Ryan said, “It’s just like the same thing anybody would do for their kids: dress them up for Halloween. For me, it’s just what we do, but for other people, it’s this really amazing thing. Every year, I ask my son what he wants to be, and immediately, I’m like, ‘Holy crap. How am I going to make that?” This year’s request of the “Toothless” character from the popular animated movie series bought Weimer to the website for the Stan Winston School of Character Arts, which offers their visitors detailed instructions of how to build characters in any shape and size. Their studio has produced some iconic characters appearing in many popular movies, including “The Terminator,” “Iron Man,” and “Jurassic Park.”

On Weimer’s Kickstarter page, he says, “Each year our ability to make cooler, more epic projects improves, but there is a limit to what we can do with just our resources.” The family’s touching story was picked up by a local news station, and that is when things really got going. By the fundraising deadline of September 30, 226 backers had raised a total of $6,454, completely bypassing Weimer’s original $1,500 goal. The father says, “It’s just amazing and humbling, just people coming out of the woodwork to help.”

When the Stan Winston School of Character Arts caught wind of the incredible project, they reached out to the family to offer personalized tutorials, tricks and tips, as well as an invitation for the entire family to pay a visit to their facilities in Los Angeles, as a part of a week-long vacation courtesy of DreamWorks Animation and Twentieth Century Fox Home Entertainment. Of the trip, Weimer said, “[That was] an absolutely once-in-a-lifetime visit,” which had included tours of the classes at the Stan Winston School and DreamWorks studios. Weimer said, “It was truly amazing for all of us.”

Co-founder of the Stan Winston School, Erich Grey Litoff, says that they were happy to spend time with the Weimer family. Litoff said, “[Their] story is heartbreaking and inspirational. [Ryan] is amazing. The whole family is incredible. We’re just on the side, supporting them with whatever tools they need to get it done.” Weimer describes the feeling he gets when Keaton is in his costume, saying, “When you see Keaton on Halloween be the coolest kid on the block – not because he’s in a wheelchair, but because he’s riding a super-epic costume – to me, that’s priceless.” Weimer said that all donations past $4,500 will be used for a brand-new non-profit organization called Magic Wheelchair, which will build costumes just like Keaton’s, for other children that use wheelchairs. The non-profit’s website is expected to fully launch this week.

Weimer speaks highly of his boys, saying, “I want people to look at my kids, not because they’re different, but because they’re amazing, and whatever I can do to try to create those opportunities [for other children] is what I want to do. And I’d love for other kids to be able to have that same experience. …It’s just an awesome opportunity for [kids] to be flying around on the dragon of their dreams.” 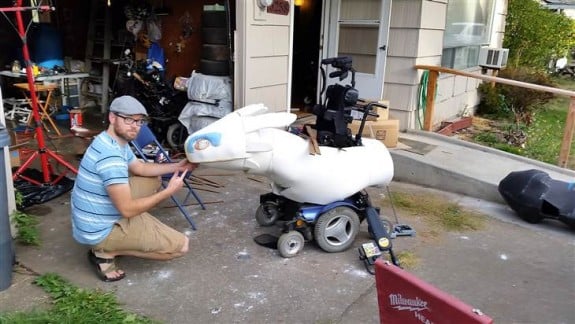 The Stan Winston School has also offered to help Weimer in achieving his dream of building costumes for other children. Litoff says, “We’ve offered him the training tools and the access to our material, and (invited him) to come down any time in person so he can have as much training as he can to build these things for kids in need.” In addition to all of these amazing things, the Weimer family has even more good news: they are expecting another child in approximately three months, and this child does not appear to be afflicted with spinal muscular atrophy. Weimer recalls Keaton’s reaction when he heard the news, “When we told Keaton that Lana was pregnant, he was hoping for a healthy baby. He wanted to see a baby who can walk and crawl. He wants to see those milestones.”