Antibacterial soaps: they’re in almost every household and school. But are they really safe? Are they really better than regular soap? This is what the Food and Drug Administration (FDA) is asking, and they’re preparing to move forward with a new rule that would require antibacterial soap makers to prove their health and safety claims. 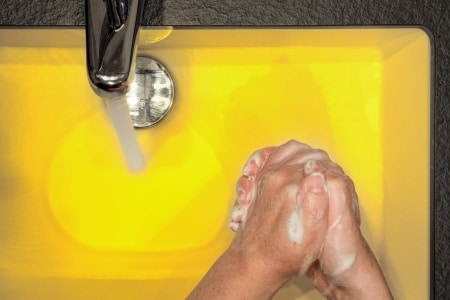 The FDA says that the problem is triclosan, an active ingredient found in about 93 percent of all products labeled “antibacterial” or “microbial.” There’s no real proof that the product is dangerous to humans. However, there are some hints that it could be.

“Animal studies have shown that triclosan may alter the way hormones [like estrogen and thyroid hormones] work in the body [if ingested or absorbed],” the agency told NBC News. And even though animal studies don’t always transfer over to humans, the FDA says that the studies “are of concern to FDA as well, and warrant further investigation to better understand how they might affect humans.”

Environmentalists have also expressed concern over how this chemical is affecting our ecosystems and water supplies. But probably the most intriguing fact of all is that it’s unclear as to whether or not antibacterial soaps even offer any benefit to humans.

Stuart Levy and Tufts University colleagues conducted some experiments back in the late 1990’s. They were able to show how triclosan actually led to mutation of bacterial strains, which made them resistant to the products designed to kill them.

“We grew bacteria in the presence of triclosan,” Levy told NBC News.

What they weren’t able to demonstrate was that triclosan can actually kill germs in the amount of time that it takes to wash one’s hands.

Triclosan works by breaking open the cell walls of bacteria – a process that takes several hours to complete; much longer than it takes to soap, lather and rinse. And therein lies the problem with the health claims being made by antibacterial soap makers, the FDA says.

“To put it simply, we need to collect additional information from the companies that make these products so that consumers can be confident about their effectiveness and about their safety,” FDA’s Dr. Sandra Kweder told reporters in a telephone briefing. “We want companies to actually test these products so consumers who purchase them know if there is any benefit at all over plain soap and water.”

But surprisingly, this isn’t a new issue. In fact, the FDA started asking about triclosan in 1978. Environmental groups and some members of Congress, such as Massachusetts Democrat Edward Markey, have asking that there be limits placed on the active ingredient. That delay has cost the FDA because they have been sued by the National Resources Defense Council (NRDC).

“It’s outrageous that FDA has waited 35 years to protect the public from this harmful chemical,” Mae Wu, a lawyer for NRDC’s health program, said back in December. “This final rule should prohibit triclosan from use in soaps.”

Though they have not commented on what has prompted the new rule, the FDA has agreed to ensure that something will be done about triclosan by 2016. In fact, they are giving antibacterial soap makers one year to prove they can fall into the ‘generally recognized as safe for use’ (GRAS) category. If they can’t, then they’ll be forced to reformulate, re-label or possibly even remove their products from store shelves.

The new rule will only cover antibacterial soaps and body washes, the FDA said in a blog post. It will not apply to products used in hospitals, nor will it extend to hand wipes or hand sanitizers. It won’t extend to toothpastes that contain triclosan either.

People are being encouraged to comment on the FDA’s site about the new triclosan rule. Additionally, researchers from industry, academic institutions and elsewhere are being asked to submit any data they may have on triclosan’s safety or effectiveness. The comments section will close in 180 days.

What are your thoughts on antibacterial hand and body soaps? Do you use them in your home? Will you refrain from using them until they can be proven safe? We’d love to hear your thoughts.