The Savage family, who have suffered great loss and long-lived fertility issues, just welcomed their sixth child to the family—a beautiful baby boy! 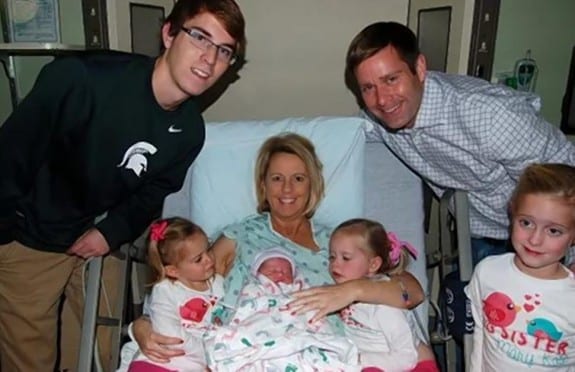 The Savages, of Sylvania, Ohio, wrote the book “Inconceivable” after a fertility clinic accidentally mixed up embryos—a mishap that resulted in Carolyn carrying and giving birth to a child that belonged to another couple. At the time, they had two sons and a daughter when they wrote that book that shares their insurmountable struggle of coping with the aftermath of giving the child to the biological parents.

A few years after the incident, the Savages welcomed home twins—carried by a surrogate—and they honestly thought they weren’t going to have any more children. Fate had a different plan in store for the family, though; at the age of 45, after two decades of battling fertility issues, Carolyn discovered that she was pregnant.

“At the age of 45, after two decade without a spontaneous conception; after countless ovarian stimulation cycles, multiple intrauterine inseminations, and more than five IVF; after six reproductive endocrinologists threw up their arms, unable to explain why we couldn’t conceive; and after one of those doctors accidentally transferred the embryos of another couple into me, resulting in a pregnancy that pushed me to the limits of my sanity; I was pregnant—the old fashioned way,” Carolyn told TODAY Parents, back in June.

During that announcement, she discussed just how surreal the entire thing was, how she doubted the at-home pregnancy tests, how she feared she would miscarry in the early months of her pregnancy. But, at 37 ½ weeks, she learned that, because of her creeping blood pressure, she wouldn’t just welcome her son home—she’d be welcoming him a little bit early!

But she still had her doubts.

“This little guy is coming a tad earlier than anticipated and although, statistically, he should be fine, we have a history of ending up on the wrong side of statistics,” she wrote yesterday on her blog, Mama on the Fly: Making my Way with a Half Full Cup.

Of course, all went off without a hitch; her husband, Sean Savage, announced the successful arrival on the family’s blog.

“Thank you for lifting our entire family in your thoughts and prayers over the past nine months. Mother and son are doing great. God is good. We are grateful.”