For eight years, Emma and her partner tried to conceive. Finally, they discovered that Emma was pregnant! Unfortunately, that joy was quickly replaced by fear—fear that their baby Maia wouldn’t survive. 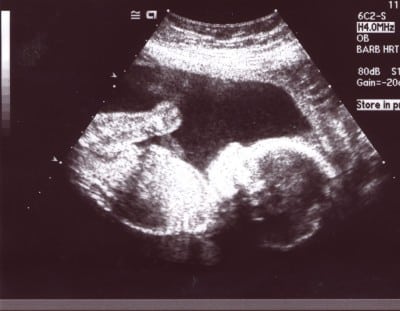 During an ultrasound, doctors discovered a “foreign body” inside of Emma’s womb—a 24mm long item that appeared to be a piece of metal or dense plastic. Specialists assumed that it might be either an IUD (although Emma said she’d never had one) or medical tool let inside of her after invasive fertility tests (despite the only surgery Emma had even had was an abortion back in 1998).

One thing was clear—the item needed to come out. Unfortunately, a surgery to remove it came with a 50 percent chance of miscarriage, and it proved to be largely unsuccessful, despite Maia’s survival during the surgery itself.

Emma would have to just wait and hope that her baby would survive.

“They pretty much said I would be really lucky if I could keep the baby,” Emma told stuff.co.nz. “I was just told the hope for the best. It was a horrible, a horrible pregnancy. I was worried the whole time that I was going to miscarry. I had to go to the hospital every month. It felt like doctors were just hoping it wasn’t something that could be pinned on them. I never got a sorry. Just . . . hope for the best. But what can you do? There was nothing that anyone could do.”

Emma’s partner, who asked to go unnamed, had his own concerns about the pregnancy.

“I was prepared for the worst,” he said. “I was worried for both of them. If something had happened, I don’t know how well Emma would have coped.”

And, being that the odds weren’t great, that didn’t seem likely, which is probably why, to this couple, Maia is “a miracle.”

Born four weeks early, but beautiful and healthy, Maia is now six months old and no worse for the wear. And, the foreign object, which came out during the delivery, was sent off to be analyzed. In the end, doctors learned that it was a calcified fetal bone fragment—more specifically a thigh or a femur—left over from the later stage abortion she’d had 17 years ago, at the age of just 15.

Though her abortion, which had been performed at Wellington Hospital, had been completed without complications, a letter to her from the Bay of Plenty District Health Board said that other case reports have shown a possible link between retained fetal bones and “secondary infertility.” This was never mentioned to Emma, possibly because of it being an “extremely rare complication,” according to the clinical leader of maternal and fetal medicine at Wellington Hospital, Jay Marlow.

“Looking at the infertile population, there’s about 1 in 1000 women—0.1 percent—who have a termination and who are then found to be infertile with calcified remains,” he said.

And it’s because of that rarity that doctors at the fertility clinic never thought to check for the foreign object while Emma underwent test after test regarding her fertility issues.

In the end, at least the baby is okay and, despite not wanting to think about the pregnancy much itself, Emma couldn’t be happier that she now has a beautiful baby girl, despite all odds.