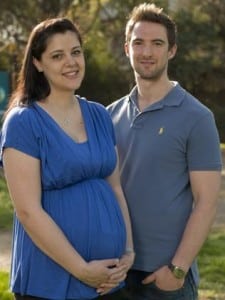 The science of tissue grafting, paired with IVF has made it possible for an Australian woman become pregnant.


Seven years ago the mom-to-be, whom is identified only as Vali, asked for the tissue to be frozen when her second ovary was removed because of cancer.

Now she is 25 weeks’ pregnant with twin girls, thanks to work carried out by fertility preservation scientists at Melbourne IVF and The Royal Women’s Hospital.

In a recorded statement released by Melbourne IVF, Vali said she is lucky her doctor offered her an opportunity to freeze tissue.

It is estimated that doctors around the world have previously achieved 29 births by grafting preserved ovarian tissue back into the pelvis.

Vali’s pregnancy is the first sustained pregnancy through a graft outside the pelvis.

The team, led by Associate Professor Kate Stern, reported the result at the annual scientific meeting of the Fertility Society of Australia in Sydney.

Seven months after a graft of thawed ovarian tissue was implanted into the abdominal wall and after a cycle of gentle IVF hormone stimulation, two follicles were found in the graft site.

Two eggs were retrieved from the follicles and transferred to the uterus.

“This pregnancy provides unequivocal evidence that normal ovarian function and pregnancy can occur at a non-ovarian site.”

Congratulations to the couple! Being pregnant with twins also comes with its own complications so we hope that Vali is able to carry her babies to term.