Home » After Years of Fertility Trouble, Utah Couple is Pregnant with Quints!

When 33-year-old Jamie Scott found out that her hormone levels were rather high, she got excited. Her and her husband, Skyler, had been trying to conceive for years; now it appeared they might be expecting multiples. Their first thought was twins, but during their first ultrasound, the Scott family learned their family was about to grow a lot more than anticipated. 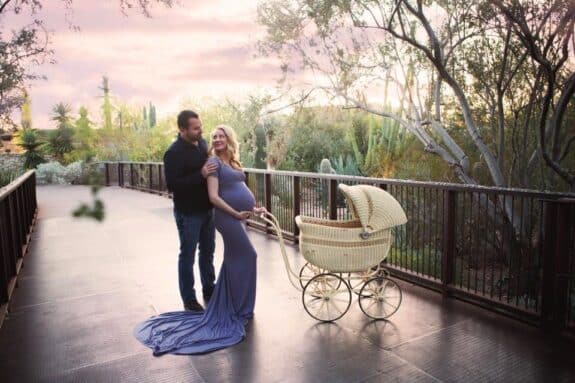 “When we had the ultrasound I was expecting to see one or two little sacs and there were four in the first 20 minutes. Then we found the fifth,” Jamie, a former nanny, told Daily Mail UK. “I just cried. I was in awe. We had tried for quite some time so it was amazing that I even was pregnant. I asked, ‘Are they all alive?’ and so they went through each one hearing their heartbeats and taking their measurements and I breathed a sigh of relief.”

Though only at 21 weeks’ gestation, five-foot-four Jamie already looks like she’s nine months pregnant. She says that is making it difficult to do pretty much everything – from walking to sleeping. But she still has a lot of growing to do. In fact, doctors want her to gain about 100 pounds during her pregnancy to ensure that she and all five babies get the nutrients they need. That means she needs to eat a whopping 4,000 calories per day! Seeing as how her biggest craving is cucumbers, she’s having to get those calories in with other, high-calorie foods like burgers, milkshakes, pizza, and ice cream.

It’s very difficult to walk so I’m kind of wheelchair-bound because I’m so exhausted, and I’m also hungry all the time.

“My doctor recommended eating 4,000 calories a day and I’ve gained 20 pounds so far but it’s not enough so I’ve got to eat a lot, fast,” Jamie said. “I’m craving healthy food like cucumbers but they have zero calories so I have to beef it up with high fat things like McDonald’s and ice cream. It’s also difficult to sleep because my stomach is growing so fast and it’s pretty painful. When one of the babies moves, they all move. It’s like a party in there.”

By April, that party will join she and Skyler’s other two children – Landon, seven, and Shayden, 12 – to create a family of nine! Thankfully, the family has already received tons of support from their community. They’ve received clothing, baby items, and more to help them prepare for the impending birth, which is expected to happen via cesarean section in late April.

Skyler, who fell in love with Jamie after a blind date, says he’s doing his own preparations as well – but in a very different way. He’s getting himself amped up for all the parenting fun he and Jamie are about to have while raising the quints.

‘We moved past the shock phase pretty fast and now it is just gratitude and excitement that we get to be on this journey.

“I’m a person who has lots of energy because I have ADHD, so my brain is perfect for this. I know we are going to lose a lot of sleep but being a dad is the most rewarding adventure of my life,” Skyler told Daily Mail UK. “It’s so amazing that I get to reset my brain and go through every stage of being a child again with them, their first Christmas, their first trip to Disneyland.

‘We want to show these five babies how beautiful and fun the world is.”