I have been a long time fan of Jennifer Garner‘s so I was excited to get the opportunity to see her new movie and participate in a question and answer session with the actress afterwards on Wednesday! I attended the screening with ‘The Moms’, Denise Albert and Melissa Musen Gerstein, and also a group of parents and kids in Manhattan.

In theaters next Friday Alexander and the Terrible, Horrible, No Good, Very Bad Day is a great movie for the whole family. Truly. There are no unthinkable tragedies, but just good old-fashioned family style chaos. I highly recommend it for kids 4 and up, or younger if you think they can sit through the 75 minute film.

After the screening we were given the opportunity to sit with Jennifer and ask her questions about the movie, and her family.  Often very private about her family, the actress shared some great stories about being a mom, balancing family and work, and a great story about a bad day she recently had. 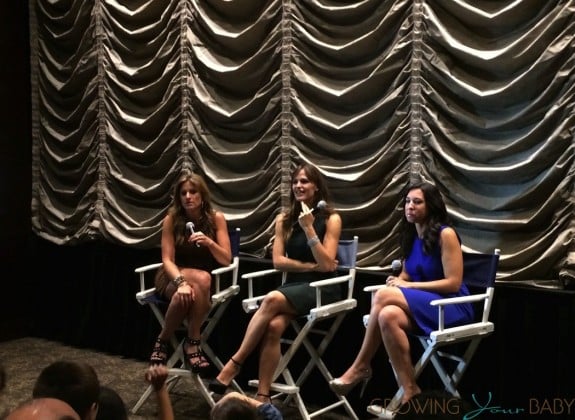 One young fan opened up the question panel by asking if Jennifer’s kids were excited their dad was going to be Batman. A subject she has been asked a lot about, Jennifer answered yes, but later revealed that she had been making frequent trips to Detroit, where the movie is being filmed, to spend time with her husband.

“I’ve made many, many trips to Detroit where he is on location. I’ve taken each kid one at a time to visit him and I’ve gone on my own.  I’m going back in a week and he’s come home. He’s home right now, AND do you know we have a date on Saturday!”

In the movie Jennifer plays a working mom, a role that is very familiar to her.  One mom in the room asked how she balances everything.{video below}

Speaking of her character’s job she said, “There were lots of times when I didn’t want my character to get the promotion because I said, look I make the choice to be with my kids instead of work – all the time – and I think that’s valid. I don’t think having it all means you get the job, and the promotion. It’s that you’re struggling to figure out the balance.”

Adding, “The chaos in the morning at that house(in the movie) is very much like my house sometimes.”

When asked by a young girl if she liked her job she said yes, but she really loves being a mom.

The good thing about this movie as that it is appropriate for all three of her kids to see!  When asked if that was a move she makes consciously she replied,

“That’s a bonus for this movie that my kids can see it because if your mom and dad are actors and you can’t see anything they do it gets kind of lame and they let us know, it’s so boring that we’re always working on movies they can’t see.  But this(movie) I would have done anyway because I loved the script and I wanted to work with Steve Carell.”

My favorite moment in the interview was when Jennifer was asked about an example of a terrible day for her and how she got through it.{video below}

“Not that long ago – this has happened twice – I was in a rush to get the kids to school and our driveway is a little bit crowded and he has a retro vintage car, and it’s big.  I scraped all along the side of my car along the side of his car.  So I ruined two cars.  I went inside and he was eating and I said, ‘honey, I wrecked 2 cars at once.’ and he said, ‘ Are you ok?’ and I said ‘yeah’, and he said ‘Are the kids ok?’ and I said ‘yeah’, And he said, ‘Ok well we’ll fix it’.”

When someone responded that her husband would kill her if that happened Jennifer noted,

“That one I got away with but there were others….”

Will she have a fourth baby?

“Three almost put me right over the edge.  Like feeew – right off the cliff.  And I love that little boy and I wouldn’t live a single day without him but the shop is closed. ”

Thank you to LandsEnd and The Moms for hosting this event!  It was a great afternoon getting to know one of my favorite celebrities better and being able to see the movie before it hits theaters!