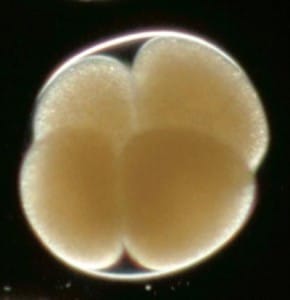 For couples hoping for a baby, In Vitro Fertilization (IVF) is currently one of the popular methods of conceiving. But this method may not always result in successful pregnancies. Now researchers from Stanford University School of Medicine have devised a two part approach of embryo analysis that identifies the best developing embryo that might lead to a pregnancy.

The researchers said that it is a common occurrence for cells in an embryo to sometimes breakdown into fragments. During this process there is either loss or gain in genetic material in the embryo. This fragmentation occurs in very early stages of human development.

By analyzing each embryo for this particular trait, the study authors found that they could select the embryo that had the correct number of chromosomes, therefor increasing the chances of a successful pregnancy than the other embryos.

“It is amazing to me that 70 to 80 percent of all human embryos have the wrong number of chromosomes,” said Renee Reijo Pera, PhD, professor of obstetrics and gynecology. “But less than 1 percent of all mouse embryos are similarly affected. We’re trying to figure out what causes all these abnormalities.”

She says that the findings show how human development is so different from that of animals and also adds that the sperm quality plays a much important role that previously believed.

In nature, this type of fragmentation at the early stages of the embryo development results in miscarriage and usually the women is left unaware that she is pregnant. When it is an IVF procedure each embryo formation and transfer is crucial as it costs thousands of dollars.

To improve the odds, many clinics transfer more than one embryo, but that only increased the chances of multiple pregnancies and also the risk that may threaten the mother’s health.

Reijo Pera and her colleagues began to look at the embryonic development just one or two days of fertilization when they grow from one cell to two cells and four cells. The embryonic analysis would not only decrease the chances of a miscarriage, it would ensure a better embryo is put back into the womb and also in future reduce the time the embryo is cultured in the lab before transfer.

According to Health Canal, in a previous research Pera had also found that that the timing of cell division and other developmental milestones as the embryo progresses from one to four cells can be used to predict, with 90 percent accuracy, whether the embryo is likely to go on to develop into a 70- to 100-celled embryonic structure called a blastocyst. It is a good indication that the pregnancy might be successful.

That research was published in Nature Biotechnology in October 2010, and is currently the subject of clinical trials in several IVF clinics across California.

For the present study the researchers analysed 75 human embryos that had been donated for research by infertile couples to the Stanford RENEW Biobank. All these embryos had been frozen within hours of fertilization thus allowing the researchers to thaw them and study the developmental milestones with time-lapse photography as they progressed over the course of two days to approximately the four-cell stage.

They found that only 53 embryos progressed to the two cell stage. Among these when the chromosomal abnormalities was observed, they found that almost 50 percent had a wrong number of chromosomes, even though they had reached the four cell stage. Ans while they would likely go on to become blastocysts, they were unlikely to result in healthy pregnancies.

“We were surprised to find that several embryos had cells that were missing one or more chromosomes with numbers that were not consistent with known types of errors,” said first-author Chavez. Added Reijo Pera, “We later realized that some of these chromosomal errors were being generated through the process of fragmentation.”

The study authors thus concluded that although neither developmental timing or the presence of fragmentation was a foolproof way to pick a healthy, chromosomally intact embryo; a combination of the two approaches appears much more likely to be successful.

“We found that using the cell-cycle parameters in conjunction with fragmentation dynamics — such as timing, degree and the persistence and resorption of fragments — rather than the incidence of fragmentation itself was most predictive of embryo chromosomal status,” said Chavez.

In addition, researchers  found that the sperm quality also had a significant role to play in deciding whether a pregnancy would be a success. Currently in IVF sperms are not screened or tested for any genetic abnormalities.

“We learned that about 20 percent of human embryos are normal, about 25 percent are carrying errors introduced by the egg, and the remaining 55 percent have errors that could be caused by either the sperm or the egg,” said Reijo Pera. “And yet, currently, there is almost no screening process: if a sperm is moving vigorously in a laboratory dish, it’s considered to be a suitable candidate for IVF.”

The study only points out that embryo analysis at crucial points may ensure that only healthy ones are transferred to a mother’s womb during an IVF cycle, increasing the chances of a pregnancy. Further research may add to this theory.