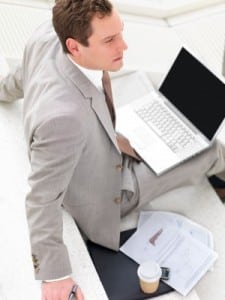 Men that use laptops on their laps may have to worry about their fertility from now on. A new report suggests that laptop use could contribute to lowering male sperm count in men who use them directly on their laps.

The report, researched by Yelim Sheynkin, a urologist at the State University of New York at Stony Brook, found that laptops could be harmful to men when used directly on their laps instead of on a desk or table. The heat generated from the laptops increases the body temperature of the men, which then decreased their sperm count. Even using a pad underneath the laptop did not prevent the temperature rise.

“Millions and millions of men are using laptops now, especially those in the reproductive age range,” said Sheynkin.

“Within 10 or 15 minutes their scrotal temperature is already above what we consider safe, but they don’t feel it.”

For men, the temperature of their testicles is very important to how high or low their sperm counts are. Previous studies found that even a change of one degree Celsius could damage sperm production. Though no research has shown that laptops absolutely cause fertility problems in men, Dr. Sheynkin suggests that men should be aware of the potential. Because holding a laptop across the lap requires a man to stay seated, with legs together, it can cause a temperature increase of up to 2.5 degrees Celsius.

According to the American Urological Association, one in six couples in the US face fertility problems. For half of them, low sperm count is to blame for the issue. Factors such as health, lifestyle, smoking, and alcohol use can all attribute to a lowered sperm count among some men. Body temperature, however, is also very important in keeping sperm production at a high level.

“I wouldn’t say that if someone starts to use laptops they will become infertile,” Sheynkin told Reuters Health, though he warned that frequent use might contribute to reproductive problems because “the scrotum doesn’t have time to cool down.”

Dr. Sheynkin warns that overheating can happen in as little as 30 minutes for men and regardless of what precautions they took to keep the temperature down, there was still an enough of a rise to potentially cause problems. For men, the best best is to use a laptop on a desk or table rather than on their lap. – Summer, staff writer