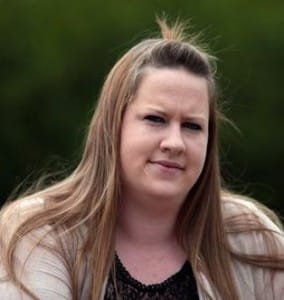 Natalia Barrass, an aspiring midwife, has a renewed passion for her chosen field after delivering a baby outside Newcastle’s Royal Victoria Infirmary. She’s also learned, first-hand, what it will feel like to form bonds with potentially thousands of patients once she completes her degree.

“It was just an amazing experience,” Natalia, who lives in Killingworth, North Tyneside, with her two sons, Callum and Harley, told Mirror UK. “It’s like I have an emotional bond to a family and a baby that I don’t even know.”

But that family will be forever grateful that Natalia happened to be at the hospital that day because, not only did she deliver their baby, she saved their child’s life.

It all started while Natalia was at the hospital, visiting a friend that had gone in to labor at the very same hospital. While outside the hospital, she heard a man shouting for help.

Natalia followed the man to a 27-year-old woman in a secluded side street next to the hospital. The panicked woman was just moments from giving birth but still yards away from the hospital door. It was immediately apparent that the mother wasn’t going to make it, so Natalia worked to calm the mother and helped deliver the baby.

“This woman’s partner decided to go get help, and I said to the woman, ‘If you need to push, then push,’” Natalia said. “Her waters broke and then she pushed and I caught the baby in my arms. He just fell into my arms.”

When the baby came out, Natalia noticed immediately noticed it wasn’t breathing. She massaged its chest and cleared its airways to stimulate breathing.

“He wasn’t breathing so I massaged his chest and wiped his fact to stimulate his breathing and he just started crying,” Natalia said. “To be quite honest, I can’t believe how calm I was, considering I’ve got no skills or qualifications. It felt like it lasted 10 seconds because it went so fast, but I was shaking like a leaf when it was over.”

Shortly after, the baby was then handed off to a receptionist that had come out with a towel. The mother was placed into a wheelchair and wheeled off along with her baby.

“The mum just turned to me and said, ‘Thank you, thank you so much.’ I just said, ‘It’s okay, congratulations,” Natalia, who wants to find the family, said. “I still don’t know who she was. I wanted to ring the hospital and find out, but I wasn’t sure if they would pass on the details because of confidentiality.”

But, whether or not she eventually finds the family, Natalia says there’s no question that midwifery is definitely the field for her.

“I’m desperate to be a midwife and this has made me more determined. I won’t let anything stand in the way,” she said. “It’s a great journey for a woman and baby.”