During a routine traffic stop, Colorado State Patrol found a sight that was more than unnerving; it was downright appalling! In the back seat of a car is a diapered toddler. Nothing too abnormal about that…until you catch a load of what’s actually in his car seat… 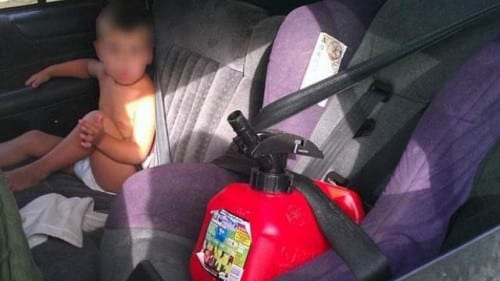 Rather than strap her son into the car seat, the mother decided to secure the gas can. The incident was photographed and posted directly on the CDOT’s Facebook page, and those that have seen the photo are nothing short of outraged.

“People were pretty outraged,” stated Colorado Department of Transportation spokesman, Stacey Stegman. “Besides not wearing seat belts, people were also angry about the gas can. Even if it was empty, people worried that the boy was being exposed to toxic fumes.”

The photograph was taken during a “Click It or Ticket” campaign conducted by Colorado’s State Patrol and local law officials.

Aurora Police Lt. Chuck DeShazer said: ”We want to make it clear that this photo was not staged or altered, except to protect the identity of the child. We take this subject very seriously. We wish this photo wasn’t real, but in fact it is a real photo taken after a traffic stop by Aurora Police Department.”

The mother had been pulled over for an improper turn. As officers approached the vehicle, they found the little guy in the back, the mother driving and a 14-year-old passenger, also in the car; none of them were wearing seat belts. The gas can was, however, safely secured in the child’s car seat. The mother was cited for three counts of seat belt violations and failure to provide proof of insurance.

Honestly, I am rarely one of those people that has nothing to say; I tend to talk too much. But this…well, it has officially rendered me speechless. I can only hope that the mother has learned her lesson and that the CHILD will be in the car seat next time she gets behind the wheel.