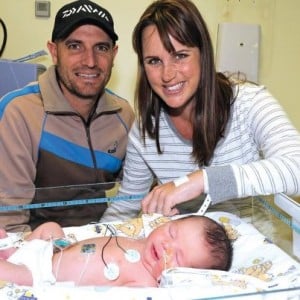 Tarryn Ford was 31 weeks pregnant when doctors discovered that her baby had a rare condition due to fluid accumulation between his chest and lungs. Thankfully surgeons were able to perform an in-utero surgery and saved her baby’s life.

Joel Hayden Ford was delivered by C-section at the Umhlanga Hospital in Durban weighing a healthy 7.3lbs. But it was the pinhole surgery carried out inside the womb that ensured the baby survived.

According to fetal specialist Ismail Bhorat, the newborn was suffering from a condition called hydrothorax where fluid accumulates between the layers of tissue that line the lungs and chest.

“The condition occurs in about one in 15000 foetuses. The build-up of fluid places pressure on the baby’s chest cavity and can cause breathing problems and prevent the heart from pumping properly,” he said.

Tarryn and her husband Hayden could not believe that their baby’s condition was critical. But doctors saved the baby by performing a new pinhole surgery while Joel was still inside the womb. The operation was performed at Parklands Hospital, in Durban  where a team of specialists, inserted a shunt to drain the fluid that had been building up in the baby’s chest.

Hayden, a former Netcare paramedic, knows what a great blessing the family has received as until now the prognosis for babies with hydrothorax was very poor.

“Thanks to the outstanding doctors and the latest medical technology and techniques, we are able to celebrate the birth of our third child. We are very grateful to everyone involved in caring for Tarryn and our miracle baby,” Ford said.

Bhorat explained that the condition was risky as the fluid stops the growth of the baby’s lungs and may lead to heart failure.

“[About] 90% of babies who develop the condition die before birth. The medical team therefore had no hesitation in recommending the surgery to the Ford family,” he said.

After the surgery, Joel’s lungs expanded immediately and his heart, which had been displaced because of the fluid, returned to its correct position.