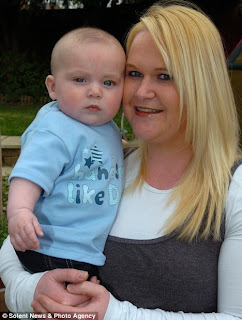 Gemma Underwood was recently shocked to discover that her baby monitor was broadcasting pictures of her six-month-old son to televisions along her street.

The young mom only found out after she received a call from a neighbour to say she could see little Alfie on her TV.

The 25-year-old dashed across the road and saw the images of her sleeping son.

She says that the baby’s dad turned off the monitor, but not the camera.

Not long after that her neighbor called and said, “I think you had better come over – there’s something you should see.”

‘It was definitely him – we even saw my mum go into his room and wave at the camera.”

Manufacturer, Summer Infant told the surprised mom that the signal was picked up because the monitor worked on an analogue signal instead of a digital one.

The firm’s product development chief, John Anderson, said there was little that could be done because analogue systems work on an open frequency used by other wireless devices, including TV set-top boxes and Sky TV.

‘We’re limited to a certain number of frequency bands and they are becoming more clogged up … simply because more people have got wireless internet and other wireless equipment.’

He added: ‘We do put a warning on the packaging.’

The only possible solution is to change to a different channel on the monitor – but that might be in use by someone else as well, he said.

Monitors, like home phones, are definitely subject to interference from other products. That is why you never fight with your spouse when the monitor is on..