Crystal and Patrick Leming had been trying for a baby for 4 years. Their wish finally came true in an unusual fashion when baby Alyssa, weighing a healthy 5lbs and 11 oz, was born in the elevator of Lawrence Memorial in Lawrence Kansas. 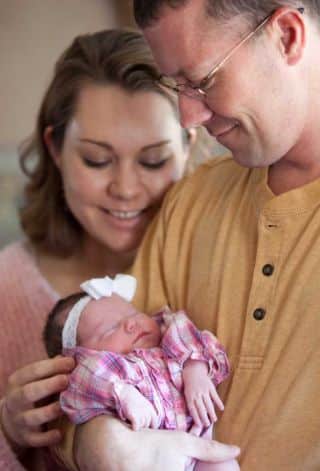 When 25 year old Crystal started having contractions at their home in Lecompton,  the couple set off for Olathe hospital 50 miles away.

But because her contractions were close together, the couple knew they wouldn’t make it in time and called 911 from a fire station. Here, an ambulance picked them up to go to Lawrence Memorial.

As the couple rushed to the hospital, Patrick decided to go ahead to the delivery room to prepare for the birth. Crystal, meanwhile, was in the elevator when the baby’s head began to appear.

When the elevator door opened, Crystal asked the medical staff, “Can somebody please catch her head?”

Patrick had no idea that his daughter had already arrived.

He says, “We really didn’t think she was going to come that quick.”

But both are not complaining as they feel that finally they were granted something they were wishing for years.

Crystal says, “We had finally gotten to the point that when people asked if we were having children, I said we couldn’t.  Alyssa has been marvellous and apparently already has a flair for the dramatic.”

The couple have nicknamed her ‘ellee’ and now Crystal plans to take baby Ellee to meet the fire fighters and the emergency medical staff who helped her during the crucial moment. – Atula, Staff Writer