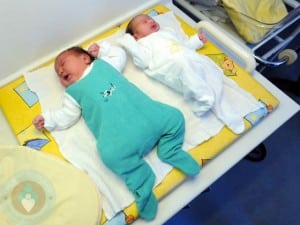 A brave (and determined) mom in Berlin Germany welcomed a 13-pound baby named Jihad during a 7 hour natural delivery yesterday. According to reports, this is the 14th child for the unidentified mother, who weighs 528lbs and suffered from gestational diabetes and possibly a metabolic disorder, as well.

Dr. Wolfgang Henrich, chief physician at Charité hospital’s obstetrics clinic, also reported that they advised the mom to have a c-section but she refused,

“She insisted on a vaginal birth despite the very high risk. We usually advise mothers carrying a child with an estimated weight of more than 4.5 kilos (about 10 pounds) to opt for a cesarean section to avoid complications.”

Experts said a woman’s uterus can indeed handle 13 pounds of baby, but the baby’s large size does not come without dangers.

“If delivery is attempted vaginally, but the fetus becomes ‘stuck’ in the pelvis, both the mother and baby have significant increase in health risks (for mother, bleeding and injury to her vaginal canal and uterus; for the baby, lack of oxygen during delivery),” Dr. F. Sessions Cole, director of newborn medicine at St. Louis Children’s Hospital in Missouri, wrote in an email. “For the baby, after delivery, babies who are very large (greater than approximately 9 pounds) are at increased risk of low blood sugar for several days after birth (persistent low blood sugar can cause injury to the baby’s brain which can have lifelong consequences) and serious birth defects (for example, birth defects of the heart).” 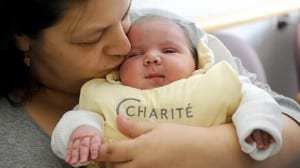 Moms who opt to deliver such big babies naturally increase their risks of vaginal tears, and babies are at risk of the shoulders getting stuck during delivery.

The condition, called shoulder dystocia, can cause permanent paralysis in the affected hand. Babies are also at higher risk of diabetes, obesity and some types of cancer later in life.

“Both mother and baby are lucky that all went well. But such a large baby is not a healthy baby, and the mother was irresponsible but lucky in the way she handled her pregnancy and the delivery. A mother that has 14 children should know better. “

This mom, however, is no stranger to large deliveries.  Of her 13 other children, 9 boys and 4 girls, four had birth weights of more than five kilograms.

While Jihad is a big boy, there are certainly some bigger babies who arrived lately. In July, 16-pound Baby JaMichael was born in Texas and 15lb little girl named Tiarla was born in Australia just a week later.