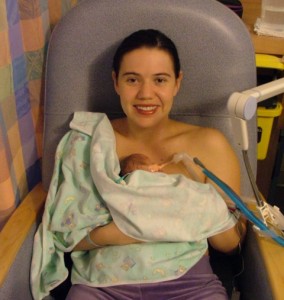 Premature infants often experience more pain during the first few weeks of life than full term infants because they are less developed, which makes simple tasks like regulating heartbeat, temperature and breathing a challenge. They also often require more tests, like heel sticks to collect blood, than full term infants.

Preemies really do have it pretty rough and it can be devastating for a preemie parent to know how much their baby is hurting, especially when this frail little human has to have all of these tests done just to make sure they are okay. But there is good news for parents of preemies when it comes to pain. According to a new study, parents can help significantly reduce the amount of pain their premature infants experience during testing through skin-to-skin contact  known as ‘kangaroo care.’

‘Kangaroo care’ is a method in which the infant is held wearing only a diaper and the parent is bare chested with a towel or sheet wrapped around both the infant and the parent. The method has been researched previously, showing that there are numerous health benefits, including heart regulation, breathing regulation, temperature regulation and pain management.

“There is a big difference between when a baby gets (blood drawn) alone in an incubator and when the mom or dad holds the baby for this procedure,” Dr. Larry Gray, pediatrician at Corner Children’s Hospital at the University of Chicago, who did not participate in the study, said.

Health practitioners have long agreed with Dr. Gray and parents have even been advised to spend time using ‘kangaroo care’ with preemies, long after they go home. Preemies that receive ‘kangaroo care’ have even been found to grow and develop quicker than preemies that did not. This study, however, was the very first to actually compare the difference between a mother’s touch and a father’s touch.

In this new study, C. Celeste Johnston from the McGill University School of Nursing in Montreal took a look at 62 premature infants in the neonatal intensive care unit that would need multiple heel sticks for blood testing. During the heel sticks, researchers had mom and dad take turns holding baby in the ‘kangaroo care’ position during various heel sticks.

Babies were video-taped to monitor facial reactions that would give indication to the level of pain experienced by the infant during the procedure. Various signs of pain were observed, including furrowed noses and lips as well as squeezed eyes. A 0-to-21 pain rating scale was used.

“This supports the hypothesis that there is something unique about the comfort of a mother’s contact over and above that of another caring adult,” researchers wrote in the report which was published in the Archives of Pediatrics and Adolescent Medicine. “The difference in the male physique, especially the chest, may be perceived by the infant to be not that of a natural caregiver.”

Dr. Gray pointed out, however, that the real message here is that, while mothers do seem to help their infants experience slightly less pain than their fathers; both parents significantly reduced the amount of pain that premature infants felt during medical procedures compared to the amount of pain felt if the infant were left to go it alone in an incubator. He concluded by saying, “Although it’s a scary thing to hold a tiny vulnerable baby, the new findings show it does help.”