Rinat Dray wanted to give birth naturally after two c-sections but when she arrived at the Staten Island University Hospital, the doctors began convincing her against natural birth and ultimately forced her to deliver her third baby through surgery. In an ongoing debate over the rise in C-sections and the rights of pregnant women, Rinat is suing the doctors and the hospital for malpractice. 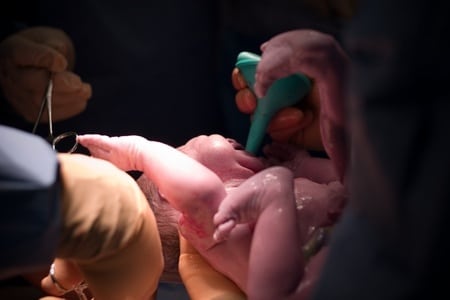 In July 2011 when Rinat arrived at the hospital ready to deliver her baby boy, she was prepared to go through labour pains and chose a natural birth. This despite her two earlier pregnancies, where she had C-sections.

Knowing about her wish, doctors immediately began to advise her against giving birth vaginally. She was told that her uterus would rupture, and she would be committing the equivalent of child abuse if she did not have a surgery. She was also told that her baby would be taken away from her.

After several hours of trying to deliver vaginally and arguing with the doctors, Rinat Dray was wheeled to an operating room, where her baby was delivered via C-section. The proof that she was not willing to have the surgery is apparent from the hospital records that state,

“I have decided to override her refusal to have a C-section,” a handwritten note signed by Dr. James J. Ducey, the director of maternal and fetal medicine. It adds that her doctor and the hospital’s lawyer had agreed.

Rinat’s third son Yosef was born this way and she is now suing the doctors and the hospital for malpractice charging them with “improperly substituting their judgment for that of the mother” and of trying to persuade her by “pressuring and threatening” her during the birth of her baby.

Her case is a prime example of the rising debate over the use of C-sections and more importantly the rights of the pregnant women to control their own bodies, even if it may have a risk of compromising the life of the fetus.

According to the Centers for Disease Control and Prevention in 2012 there were 1.3 million or about 33 percent caesarean births. As per World Health Organisation this rate should be higher than 10 or 15 percent.

The rate of C-sections have been consistently increasing across the country since 1996 despite expert warnings that the surgery may actually create more risks for the mother and baby than a natural birth.

In fact, in the papers submitted in the court, it has been revealed that Rinat’s bladder was cut during the procedure she was not willing to undergo.

There are many reasons why surgery for child birth has increased over the years. These include, pregnancy complications or high risk pregnancies, doctors and parents scheduling the birth of babies at a certain time, or fears of malpractice lawsuits should the baby be injured during a normal delivery, which typically takes far longer than a cesarean. Obstetricians pay some of the highest malpractice insurance premiums of any medical specialty because of the frequency of birth-related lawsuits.

Christian Preston, a spokesperson of the hospital said he could not comment much on the case because of the litigation and privacy concerns but he defended the hospital’s records. He said that the hospital had 22 percent C-section rate compared with a state average of 34 percent. Its 2012 rate of “vaginal birth after C-section” was almost 29 percent, much higher than the state average of 11 percent, he noted.

Rinat’s Lawsuit filed in State Supreme Court in Brooklyn last month, where she resides, also names Dr. Leonid Gorelik as a defendant. He was the doctor who delivered the baby. Dr. Gorelik, in court papers, denied that he had taken Mrs. Dray for a C-section against her will. He said that her own “culpable conduct and want of care” contributed to any injuries she may have sustained.

In the medical record, he wrote that the fetus was “at risks for serious harm without the C-section.”

Supporting her case, Dr. Howard Minkoff, chairman of obstetrics at Maimonides Medical Center in Brooklyn, whose articles on the subject of patient autonomy have been published in medical journals, said that women had absolute right to refuse treatment even if it meant death of the fetus.

“In my worldview, the right to refuse is uncircumscribed,” Dr. Minkoff said, cautioning that he was not commenting on the particular facts of Mrs. Dray’s case. “I don’t have a right to put a knife in your belly ever.”

It is a hugely debated subject, especially when morals come into question and the instinct of a mother to be protective of her child even if unborn. But as again a mother, is it not her decision ultimately to decide what she wants to do with her body and her child? The case opens many probabilities and questions unanswered.