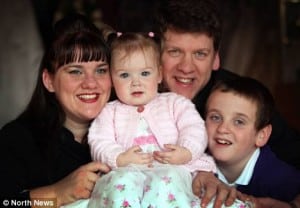 Donna Caldwell’s second pregnancy was traumatic. So much so, that doctors told her she would never be able to conceive another child. She took that challenge, and is now 18 weeks pregnant with her third child.

Already the mother of a young son, she had undergone IVF treatment in order to have a second baby. Early in the pregnancy, doctors believed she had lost the pregnancy and scheduled her to remove the baby so that she could begin again. Little did they know the baby was still alive and thriving.

One mother later, it was found that the procedure had removed only the womb lining and despite the low odds that the baby could survive, Donna managed to carry the pregnancy to term and had her daughter, Alexandra, in April of 2009.

That pregnancy, however, doctors said would be her last. Shortly after giving birth, she was diagnosed with endometriosis, polycystic ovaries and damage to her fallopian tubes. Along with the strain of IVF treatments, doctors told her that she would not be able to conceive again. They also warned that she would be at risk of serious complications if she did.

The couple was content with two children and had not planned to have any more. A strange pregnancy dream, though, lead her to take a pregnancy test just in case. Shockingly, the test was positive. The pregnancy they never believed would happen, was now going on.

‘We are thrilled. It was such a shock, it took a long time to get our heads around it.

‘The doctors would never say never, but they said the chances of me getting pregnant again were almost nil. It is a miracle.’

Donna has had scans done and the baby seems to be growing well. So far, the pregnancy has gone smoothly for her. The new baby is expected to arrive February of next year.

‘Both Alex and this baby shouldn’t even really be here. It just shows you should never give up hope, because the doctors aren’t always right.’