National Geographic offers an interesting view into the world of identical twins tonight starting with their amazing conception and science behind their existence to profiling them in their regular lives. 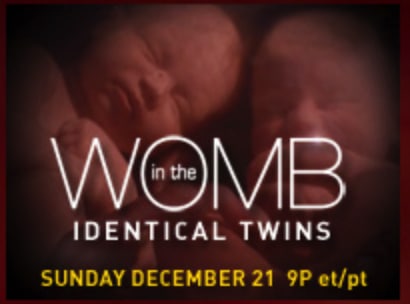 Similarities between identical twins go on to be something that are often more than skin deep. Many have similar jobs, tastes, hobbies, love interests, and phobias.

To test this theory scientists have also studied twins that were separated at birth and forced to live different lives. When putting together the life timelines of these twins, it was shocking to see how their lives were almost parallel to one another before meeting while wearing almost identical outfits.
The special also explains some unusual baby phenomenons that we have covered on this site like the mismatched twins Jake and Tom Armstrong, the amazing little girl with 8 limbs Lakshmi Tatma and black and white twins.
Parents who have had a set of twins will love the amazing graphical explanations of each stage of a twin pregnancy.

National Geographic’s clear footage from inside the womb is not only amazing, but breath taking.

Some amazing twin facts from the documentary: