Most midwives in the UK have long been recommending the use of olive or sunflower oil for an infant’s dry skin, although aside from a few small lab studies there has been little research on the effects of these oils. 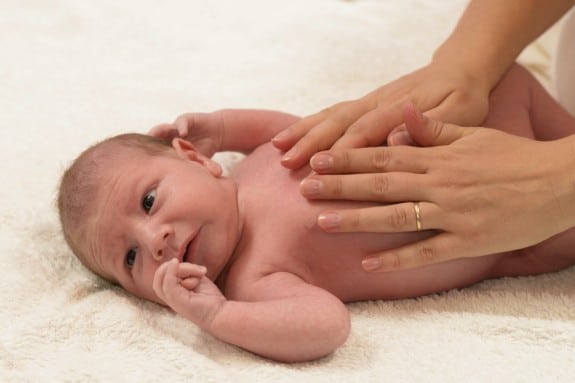 There has been a dramatic increase in youth eczema since the 1940’s, when just 5% of children ages 2-15 suffered from the skin condition compared to about 30% today. New research led by the University of Manchester sought to find out if there was a link between this surge in eczema and use of oils.

To test the theory, midwives at St. Mary’s Hospital recruited 115 newborns for a pilot study. Over a 28 day period, the infants were divided into three groups – olive oil, sunflower oil, and no oil. At the end of the trial, researchers found that the infants who received either oil as a skin treatment had delayed development of the lipid lamellae structure, as compared to the no oil group.

If we think of the skin barrier function as a wall with bricks made up of cells, the lipid lamellae is the mortar holding it together. When the lipid lamellae fails to develop normally cracks appear that let water/moisture out and potentially let foreign bodies in.

The oils prevent these cells from developing as quickly and so could be linked to skin conditions including eczema. And while the skin of the infants whose bodies were treated with oils was better hydrated, researchers concluded that the implications of delaying development of the lipid lamellae was a greater risk, outweighing the benefits of the oil. In healthy babies, the Manchester researchers concluded that they would not recommend the use of either oil.

There is no national guideline in the UK on neonatal skin care, but studies conducted in South Asia indicate that sunflower oil has some anti-microbal effects that may benefit premature babies in developing countries.