Home » Nicotine Products During Pregnancy May Increase Risk of Colic 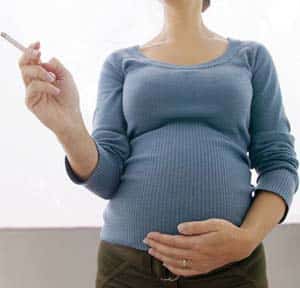 Colic, a condition that is characterized by an inconsolable cry that lasts at least three hours a day and occurs more than three days a week for at least three weeks. It generally starts within the first few weeks of life and it can continue throughout infancy. The condition is stressful for both babies and parents alike. But can it be prevented?

The cause of colic is still very misunderstood. However, previous studies have linked smoking to an increased risk of colic. A more recent study, published in the online issue of Pediatrics on Feb. 20 and set to publish in the print version in March, links more than just smoking to colic.

Out of all of the children born to these women, about 8 percent were said to have colic. For women who smoked or used any form of nicotine replacement therapy during pregnancy, researchers found that their chances of having a colicky baby were significantly higher – 30 to 60 percent.

“The theory is that there are nicotine receptors in the GI system and nicotine receptors that alter serotonin, and these alterations affect the babies after birth, causing colic,” stated Dr. Jennifer Wu, an obstetrician-gynecologist at Lenox Hill Hospital in New York City.

Daniel Jacobsen, a nurse practitioner at North Shore-LIJ Health System’s Center for Tobacco control in Great Neck, N.Y. says that he recommends counseling and behavioral therapy for women who are struggling with kicking the habit.

“A very small percentage of women continue to smoke throughout their pregnancy,” Jacobsen said. “Most women, when they find out they’re pregnant, are able to quit.”

There are, however, some cases in which a woman just can’t seem to stop smoking. In these instances, obstetricians may weigh the risks of nicotine replacement versus the continued habit of smoking.

“Nicotine replacement is not the recommended treatment, but when women are still smoking in high amounts are exposing themselves and their fetus to all these toxins, it is sometimes though to be the lesser harm,” Jacobsen said. “Colic can be hard on the parents. It’s a nuisance…but the physical effects of tobacco causes on the fetus are worse. They can cause death or severe problems throughout the lifespan.”