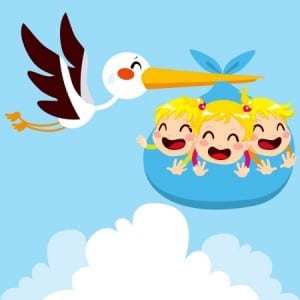 For the most part, couples who turn to in vitro fertilization are those that have had trouble conceiving a child naturally. Historically, the techniques used to impregnate involved transferring as many embryos as safely possible to increase the chances that one would take. However, with the advancements in technology, this is no longer necessary. In fact, more and more doctors are choosing to only transfer one embryo at a time, and often they are successful.

But what happens when nature or medical negligence results in the birth of more children than the couple wanted? What happens when feelings of fear, concern, anger and resentment override the miracle of finally having children when once there wasn’t any hope? Is getting more than what you bargained for grounds for a lawsuit, or should parents simply accept the risks as they are? Who should decide? What message would a lawsuit send to the “extra” child or children involved?

These and many other questions are being discussed since the beginning of a lawsuit against an IVF clinic in Australia. Thought to be only the second of its kind in the country, the suit is for alleged breach of contract. The couple, who have asked to have their names remain anonymous, had asked for no more than two embryos to be transferred, but ended up having triplets.

The couple says that they filed the suit with a heavy heart, and it wasn’t a decision that they’d made lightly. Essentially, they are filing suit for the cost of raising the third child that they hadn’t asked for. The total cost in damages comes to $510,400.

Their solicitor, medical negligence lawyer Sarah Atkinson, told the Inquirer that the couple had stated they preferred to have one child, but they were prepared to have twins. What they weren’t prepared for was three children. And while they love all three, the pregnancy ended up being a difficult one, filled with issues like gestational diabetes, premature birth and two months in a hospital for her newborn babies.

“We don’t take this legal action lightly, we thought long and hard about it, but believe the clinic should be held accountable for the way they mismanaged our IVF plans,” the unnamed mother told Inquirer.

“This couple adore their children, but having three babies at once – with all the risks inherent in that – it is not what was agreed between the IVF provider and the couple,” Atkinson told Inquirer.

As previously mentioned, these parents aren’t the first to file suit for what is known as “wrongful birth” resulting from IVF. Back in 2005, the lesbian mothers of twin IVF girls sued a Canberra obstetrician for $400,000 for transferring two embryos instead of one, as they had requested. The suit ended up being a long, public battle in which the ACT Supreme Court initially dismissed the suit, saying that the doctor had not been negligent. However, after an appeal, the judge ruled in favor of the two mothers, saying that the doctor had breached his duty of care. Damages of more than $80,000 were awarded to the birth mother, and $236,000 in damages were awarded to the couple.

Sonia Allan from Deakin University, who recently wrote a soon-to-be-published textbook on health law, says that cases like these are rare and emotive. She also pointed out that lawsuits can also include the failure of birth control; case in point, a case in which judge Eric Pratt of Queensland awarded damages to a father after a man’s vasectomy failed. Though the failure had resulted in the birth of a healthy child, the damages were equal to the cost of raising the child until it reached the age of 18. Allan says that this is still relevant today, even in cases that may not have anything to do with failed conception.

“Whatever the assumptions may have been from the time immemorial as to the blessings of children, despite the view from time to time that the world is a vale of tears, the reality for modern Queenslanders is that their children will have to be educated well into their 20s if they are to take a comfortable place in the society of the 21st century,” Allan told Inquirer. “Every baby, however, lovely, has a belly to be filled and a body to be clothed. The law relating to damages is concerned with reparation in money terms and this is what is needed for the maintenance of a baby.”

Ali Mountifield and her husband, Tony Smit, understand what the couple engaged in the current suit. After trying and failing to have a baby for quite some time, they had feared that they’d never be parents. So when they’d sought out IVF, they were overjoyed to hear the heartbeats of twins during a seven week scan. Six weeks later, they heard a third heartbeat.

For Ali, the third child was an anomaly that occurred in nature. While overjoyed with the realization that she would be a mother to three children, she also recognized the challenges of carrying and raising three children over two.

“The risks are higher with a twin pregnancy and, if you get another baby on board, the stats go through the roof: everything about your pregnancy is now high-risk for you and your babies,” Ali told The Australian. “And there’s nothing cheap about having three babies at once: there’re three cots, three high-chairs, a pram that needs to be three-long or three-wide, and you can’t hand down clothes.”

Of course, when looking at her three beautiful, blonde-haired six-year-old children, Ali says she will be forever grateful for the oddities of nature. And, if given a chance to redo things, she says she wouldn’t have changed a single thing. However, she recognizes and understands the feelings and emotions involved in the lawsuit of the other couple, especially since their triplets were allegedly conceived through a medical mishap rather than a vagary of nature.

Not everyone can see it with the eyes of Ali or the couple currently involved in the suit, however. Professor Gab Kovacs from Monsah IVF is the director of ACCESS, Australia’s national infertility network. With decades of experience in helping couples medically create a family, he’s seen it all – everything from the multiple embryo transfer that was commonplace years ago to the accidental and negligent multiples resulting in the better, more advanced assisted reproductive technology (ART) techniques used today.

“Historically, the motto was ‘pregnancy at any rate,’” Kovacs told The Australian. “We used to put in as many as four embryos in the early days, when pregnancy rates were lousy.”

But that just isn’t the case anymore, Kovacs says. Nowadays, he and many other IVF specialists insist on single embryo transplantation because the successful pregnancy rates are much higher – 21.1 percent chances during the first cycle, 31.1 percent after two cycles, and 36 percent after three cycles, 38.6 percent after four, and 40 percent after five cycles. Those that are younger are also more likely to have better outcomes.

In fact, single embryo transfer has become so successful that the proportion has increased from 63.7 of all cycles in 2007 to 73.2 in just five years. Two embryo transfers have dropped from 35.7 of all IVF cycles to 26 percent in that same amount of time, and three or more transfers are rare, occurring in less than 1 percent of all cycles. And in 2011, 93.1 percent of all ART-enabled births involved a single baby, while only 6.8 percent resulted in twins and higher order multiples were extremely rare.

“Australia and New Zealand are leading the way, having the lowest regional rate of multiple-birth deliveries in the world,” fertility doctor and associate professor Mark Bowman, the president of the Fertility Society, said in the launch of a report that provided the above information.

Of course, there is still the chance that a single embryo can split, as they did for Ali and her husband. What’s more, a woman can naturally conceive at the same time that an IVF cycle is done. Kovac says that this typically raises concerns over the risk during pregnancy, but rarely concern of raising extra children from the parents.

“People think twins are cute,” he said. However, he also noted that multiple births can often result in a great deal of shock from parents.

However, litigation does not usually follow successful pregnancy, even when the parents get more than what they’d initially signed up for. In fact, during his time in working with couples seeking IVF, he says that most parents are elated that they’ve been able to conceive, which is why he’s so surprised that the parents involved in the current suit would bring litigation against the clinic.

“I don’t know about this specific case but, speaking in generalities, if someone has had a successful pregnancy, even a multiple pregnancy, I find it hard to understand how they could complain about it,” Kovacs said. “It is also a really bad message to send to the children, that one of them wasn’t wanted. I wouldn’t want my children thinking that.”

What do you think? Should parents who get more than what they’d expected through IVF sue the clinic? If so, on what terms? Do you feel that this would send a bad message to the children? Do you think that the parents have a right to be upset or angry about the extra births that sometimes result in IVF?