Social media has made sharing photos both easy and fun . . . but also more dangerous. Predators are everywhere, and even some of the most innocent pictures can be misinterpreted. So, to keep your child safe, make sure you never post these five photos of your child on social media. 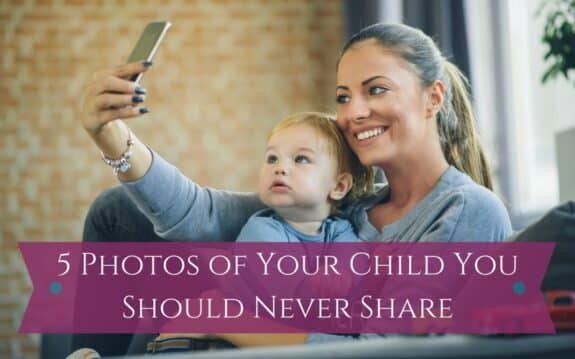 While, to you, bath time photos and pics of your toddler running around the house naked while potty training are adorable, such photos can easily fall into the wrong hands. (In fact, one Australian study found that almost 45 percent of photos on a known child pornography site had been mined from social media.) So, whether it’s bath time, potty time, diaper changing time, or a failed attempt at dressing him or herself, make sure you keep any photos with nudity off your social media page.

2. Photos of Other People’s Kids

Photos of your child’s class, photos with friends, and other group pics are great to share with family and friends, but posting them online can have some unforeseen repercussions. For example, you may not know that your child’s best friend has an abusive parent in another state. Posting a photo could give away their location and endanger their safety.

General photos may not reveal much about where you live or where your child goes to school, but some photos can easily put your child in danger. Examples can include photos taken at major, nearby landmarks and parks and photos in which your child is wearing a school uniform with a logo. If in doubt as to whether a photo is identifying or not, it’s better to leave it off than to add it. (Also note that you should turn off location sharing whenever you post pics of your children.)

When my youngest was about two, he loved climbing into our dog kennel. He’d shut the door and just giggle. It was unlatched, and I was always in the room, just to be safe . . . but had I shared such a photo on social media, it could have led to a pretty serious situation. Someone could have reported it to the authorities, and I would have had to explain why I felt it was acceptable to put my child in a cage (though I wasn’t the one doing it). If you have a similar photo – be it letting your kid sit in your lap while you move the car into the garage or them playing with a questionable item, keep any photos of activities that appear unsafe to yourself.

It’s one thing to bring out the family photo album and share it with your teenager’s new beau. It’s an entirely different issue altogether if you post embarrassing photos of your child online. The reality is this: some moments are meant to be kept private. Think that photo of your child crying over a clown is harmless? Ask any kid that’s ever been bullied in school for having a very real but seemingly ridiculous fear. Remember: what you post online stays there forever, even if you delete it. Before you post a pic, think of how your child might feel about it being there in a few, a dozen, or even 20 years.