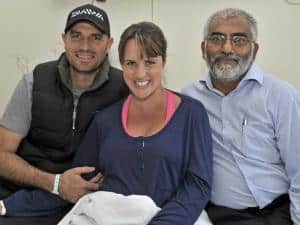 Working as a pilot for Netcare911 and SA Red Cross Air Mercy Ambulance Hayden Ford had saved many lives including that of many preemies and newborns. But even his job could not prepare him for the news that his own unborn son’s life was in danger due to a rare and fatal medical condition. What came as timely boon for the Fords was a pioneering surgery that saved their baby’s life even before he was born.

35 year old Hayden and his wife Tarryn were expecting their third child when doctors revealed something was not right with the baby. The South African couple were told that their baby had a rare medical condition called chylothorax or pleural effusion.

Fluid had filled in his chest cavity which was hindering the growth of the lungs. It was also putting excessive pressure on the chest cavity, which could lead to cardiac failure. Tarryn was 32 weeks pregnant.

Doctors suggested a rare surgery to treat the rare condition. Still largely experimental, it involved pinhole surgery, inserting an 18cm-long needle through Tarryn’s stomach and uterine wall. The needle then needed to pass through the baby’s ribs and into his chest cavity to drain out fluid via his mother’s amniotic fluid. A specially-imported shunt would be then inserted down through the needle to continue draining out fluid. The shunt would remain in place until the baby boy was delivered via C-section.

“It was daunting, but we were just happy there was an option on offer,” said Ford, who is now a media company director. “We knew that if we waited any longer, he would not survive.”

30 year old Tarryn agreed. “We had to give the baby the best chance we could,” she said.

Within 24 hours a medical team of experts headed by Dr. Samad Shaik, of Parklands hospital in Durban started preparing for the surgery. The team also included fetal specialist Dr Ismail Bhorat, and Dr Carlos Hartmann, the mother’s obstetrician along with six other standby doctors and four nurses.

The vital UK-manufactured pleuroamniotic shunt too had been flown in. The Shunt could only be used for humanitarian purposes, explained Dr. Shaik and the benefit of the surgery had to greatly outweigh the choice of not doing a surgery.

Ninety percent of babies who developed the condition died before they are born, Shaik said and therefore in case of the unborn baby boy, the surgery was a must and the shunt could be used.

The operation was performed last Saturday at the Durban hospital. It lasted 90 minutes.

Scans taken during the operation revealed a large black area in the baby’s chest with the heart pushed to one side and the lungs squashed.

“The shunt is made of a special type of plastic which is coiled at both ends. Once it is inside, the needle is removed and the shunt curls up outside the chest cavity, preventing it from coming out,” Shaik said.

“There are lots of little holes in the shunt which drain the fluid out into the amniotic fluid.”

A scan after the operation showed the shunt had already started to work and the baby’s lungs had expanded.

Tarryn will be discharged this week and will then have to stay in bed for another five-six weeks until the baby is delivered.

Another challenge awaits the doctor when the baby boy is delivered. His shunt will have to be clipped before the delivery so that the pores do not suck up air and stop the heart from beating.

The Fords who have two older children Jade, 10, and two-year-old Fynn are now eagerly awaiting the arrival of their fighter son.

“My baby’s life has been saved. He is a little fighter,” his mother said.