With just a few short days before the Christmas holiday, one South London mother received the best gift that she could have ever asked for, the quick thinking and life-saving skills of a police officer who responded to her 999 call, who saved her baby’s life. 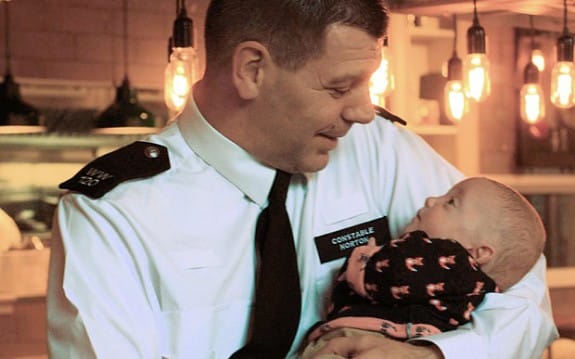 Jo Paine had given birth to her little man and brought him home just days prior to the harrowing incident. She had noticed that Harrison stopped breathing while he was in his crib. In that moment, Jo knew that she had to act quick if little Harrison’s life was to be saved. That was when she dialed 999. Ms. Paine recalls the ordeal, “My world crashed before my eyes. He hadn’t woken up for his feed, his skin had turned grey and his eyes were still. I immediately lay him on my bed and starting chest compressions and rescue breathing into his mouth and nose, just as I had been taught at hospital days before Harrison and I had been discharged.”

When the call came in, Pc Steve Norton was the officer on patrol in the area when he responded to the report of a baby not breathing. After he arrived at Paine’s home, he realized that if he waited on an ambulance without doing something, precious seconds and minutes could be lost. Norton acted quickly, lifting the infant out of his crib and despite wearing full body armor, ran all the way to St. George’s Hospital in Tooting. It was Norton’s quick reaction that ultimately saved Harrison’s life, getting the baby to the hospital in enough time, allowing for doctors and hospital staff to stabilize the child.

The memory of the moment is still ingrained in Paine’s memory, and she remembers how she put all of her trust into PC Norton, saying, “He responded and made a noise before he started to shallow breathe. PC Steve Norton arrived at my door and immediately handed Harrison over to him. I did this with complete trust and confidence. At that moment in time, I believed that he would do all he could to help my baby.”

Officer Norton told the Telegraph, “I will never forget the moment Jo handed Harrison to me; I looked down at his face and it dawned on me that this could have easily been my baby who was a toddler at the time. I knew that every second was crucial to for this tiny baby who was not breathing properly. Jo was the one to initiate CPR and I have no doubt that her actions allowed me the time to get him to the hospital. Sprinting with a fragile baby in heavy body armour was exhausting and stressful, but the moment I handed him to the medical professionals in the resuscitation room, I knew that I did absolutely everything I could for Harrison and Jo.”

After being reunited with the child and his mother, Norton also said, “Seeing Harrison and Jo happy and well in the run up to Christmas has been the most worthwhile and heart-warming experiences of my career.”

Detective Chief Superintendent Richard Smith, the Wandsworth Borough Commander commends officer Norton’s quick thinking and sharp reflexes and said, “Steve’s actions are a reminder to us all, how we, as police officers, are constantly faced with challenging scenarios which require skill, determination and total professionalism. I would like to place on record my recognition of Steve’s outstanding actions. This courageous act has touched us all and Steve’s incredible humility which he has displayed throughout is testimony to his complete commitment to serving his community.