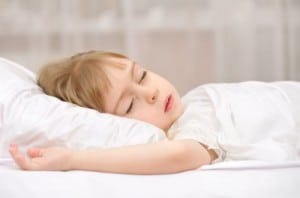 School supplies and school clothes are showing up in stores, which can only mean one thing: it’s almost time for back-to-school! Of course, there are still a few days of summer left, which means kids all over the world are doing the best they can to soak up the last few free hours they have. But that may also mean that they’re running on summer hours – later bedtimes and later wake-up times – which could mean trouble once school starts.

According to recent a study of more than 11,000 children from the UK, children with either no regular bedtime or a later bedtime scored lower on performance tests in math and reading when compared to those that had a consistent bedtime schedule. Published in the Journal of Epidemiology and Community Health, the study proves just how much poor, irregular sleep can affect growing children.

But poor quality sleep may affect more than just academic performance. Sleep deprivation is also thought by some to affect behavior issues. Some experts even believe that, in some cases, the affect is so profound that the child actually displays ADHD symptoms, even though they don’t have the condition.

“Sleep is so closely related to so many aspects of a child’s behavior,” Dr. Shalini Paruthi, director of the Pediatric Sleep and Research Center at Cardinal Glennon Children’s Medical Center told St. Louis Post-Dispatch. “Children who do not get enough sleep can easily become irritable and moody. They may act out more and exhibit hyperactive behaviors because they are so tired. We certainly know that poor sleep can lead to poor performance in school, but it can significantly affect a child’s social life and ability to interact with others as well.”

It is during sleep that the brain is processing everything that is learned and experienced throughout the day. Even small sleep losses can disrupt the body’s ability to do this. Example: just in one week’s time, one less hour of sleep each night equates losing almost a full night’s worth of sleep. Yet, despite its importance, many children (and their parents) are suffering from chronic sleep deprivation.

Parents can help children with consistent bedtimes by calculating how much sleep their children need and then setting the bedtime accordingly (or school-age children it should be about ten hours each night). Once a bedtime is set, a nightly routine can be created to help trigger their internal clocks to associate those activities with rest. For example, bathing, brushing teeth and reading a story at the same time every night.

Parents should also consider naptime as a potential problem. If naps are late in the day, the child may struggle to fall asleep, and parents should plan accordingly. However, school-age may be able to get by with a simple quiet time rather than a nap.

Of course, there’s more to good sleep than just the bedtime. Certain things can disrupt sleep or make it harder to fall asleep. For example, flickering lights from a television or computer can disrupt the melatonin production and rob the child of quality sleep. Parents can help by turning televisions and computers off  30 minutes prior to bedtime.

If you’ve already done all of these things and your child is still struggling to fall asleep, you may want to take a look at your child’s daytime and nighttime behaviors. For example, certain conditions can disrupt the body’s ability to regulate melatonin production. Symptoms of snoring, excessive daytime sleepiness, difficulty falling asleep, uncomfortable leg sensations at bedtime or at night, nightmares and bedwetting could indicate a sleep disorder. If you’re concerned that your child has either of these issues, you should talk to your child’s pediatrician.