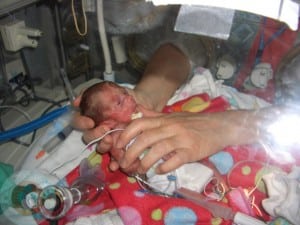 Amber and her husband Josh found out she was pregnant with twins in February 2010 just 3 months after after miscarrying in November 2009. They had went in for a full detailed growth ultrasound on May 6th. May 7th at 2:15 am Amber woke up and her water broke on the way to the bathroom.

She recalls her panic,


At first I thought I peed my pants. I was only 20w5d. It was too early! As I was cleaning it up it gushed again, and I started to panic. I yelled for my husband sobbing so hard I could barely get out that he needed to call my doctor.

She asked Amber a few questions and then told her that her water had broken and to get to labor and delivery immediately.

Labor and delivery?? WHAT! I’m too early! I thought I was losing 2 more babies. I was devastated.

Once there, they confirmed that Amber’s baby boy’s water had broke, due to an infection. He only had 0.6cm of fluid left. Normal is about 8cm. Amber was then admitted to the hospital and had to lay flat on her back.  She was not able to get up at all – not even to go to the bathroom or shower. While in the hospital every three hours staff would check her temperature, blood pressure, and three times a day they would check the babies heart beats.

Another nurse  came in to try and even Amber’s husband desperately tried to find the heartrate. When the doctor came in he did a bed side ultrasound and couldn’t even find the baby. He called in a formal ultrasound and when they finally arrived, both babies popped up on the screen but only their little girl was flying around the screen and had a heart that was seen flickering away.

My precious boy was laying there still as could be. That was the last time I got to see him.

Amber started having contractions the next day and was hooked up to monitors to monitor the baby. They told mom that as soon as her heart rate spiked to 170 or higher or her temperature spiked she would have to deliver the baby. Amber was horrified.

Luckily, they were able to give her steroids to help mature the baby’s lungs. Around 7pm her heart rate spiked to 170 for a minute and the doctor was called.  She was told it could mean that an infection was setting in. By 8pm she was whisked off for an emergency c-section. Amber had to be completely put under and Josh wasn’t allowed in the room. The doctors told the family that they wouldn’t be able to see the baby because with her being so small they would have to rush her to the NICU.

At 8:52pm Brielle Lynn Peterson was born. Amber was told after she awoke that the NICU nurses came out smiling and stopped with her for a second to show her off as she was doing so well. She was breathing on her own and they were very impressed how well she was doing.

Amber didn’t get to see her baby that night. Josh and the family went to meet her and they brought mom pictures of Brielle but she was too tired and sick from the anesthesia.

The next afternoon Amber made it in for only an hour.

Brielle grabbed onto daddy’s finger at just one day old. We couldn’t hold her or move her much due to the risk of brain bleeds. We were lucky to not have ANY brain bleeds during her stay in the NICU! She also noticed daddys voice right away and start to sqwirm when he would talk. It was adorable! She was so small that our wedding bands fit around her tiny arms. At least the girl had some bling right away!

Brielle was intubated (breathing tube down her throat) and placed on the ventilator shortly after arriving in the NICU. She was starting to have difficulty breathing. However by three days old she was breathing room air (21%) so she was put on CPAP (continuous positive airway pressure).

This was also the first time I got to hear her cry! She sounded like a little kitten.

Brielle was already being fed. She was getting 1ml every 3 hours. Then they would up it by 1ml every 12 hours as tolerated. They began to up that at 3 days old. Doctors said that was pretty great at her gestation. She would even suck on the feeding tube while she was being fed.


Like many premature babies, she had some jaundice so she was under the phototherapy lights for a day and a half.

Brielle has been a stretcher from day one. Always trying to help the nurses change her diaper and even pushes them out of the way when they are trying to do labs or anything she doesnt like. They call her “fiesty!” But like they said, you have to be fiesty to make it being that small!

At just eight days old Amber was able to kangaroo her tiny preemie (which is skin to skin). The NICU would only let mom and dad hold her for an hour a day or until she wasn’t tolerating it anymore.

I held her for two hours the first day! She got the hiccups while I was holding her and sounded like a squeaky little mouse.

They always tell you that the first week or so is the “honeymoon stage” of a preemies life. They seem to be doing SO well and then they will start to take their steps backwards that they are almost expected to take. I tried so hard to set myself up for those set backs and I thought I did a good job, but when the first set back came I was a complete MESS!

At 13 days old Brielle went backwards. She ended up back on CPAP. She was just getting too tired doing all of the work. The doctors had believed that she had a partial lung collapse. As the days went by Brielle just kept getting worse and worse. They told mom and dad if she needed anymore oxygen she would have to be intubated.

Brielle’s first major setback was pneumonia on June 17. She ended up being intubated and put on the oscillator. It gave her 600 breaths a minute and would gently shake her. They also gave her a sedative and morphine so she would be comfortable and lie still.

She looked so lifeless its hard to see her like that! We were used to seeing her pushing nurses away and flailing her arms about.

This was the first time the nurses said had actually said to mom and dad that she was “in the woods”.

It was scary!! First time we ever thought we might lose our little angel. But we had to stay strong and keep the faith. We had to keep going for our little girl as she was still fighting!

The next morning mom and dad got news that Brielle’s kidneys had shut down. The doctors explained all of this to mom and then put in a catheter hoping it would drain her bladder but there was nothing there which meant the fluids were going elsewhere. They determined that her lungs were over inflated so they decreased the pressure on the oscillator to deflate the lungs a bit. It worked.

June 21 mom spent eight hours in the NICU and had to run home to let the dogs out and came back an hour later to find out her prayers were answered. Brielle had produced some urine.

It was a tense 5 days to say the least!! Then a month later she got pneumonia again. This time the doctors caught it and her symptoms were far less than the first episode.

By the time Brielle was 24 days old she already had six blood transfusions.

We knew this would be common as they had us sign consents in the first few days of her life.

June 30th Brielle finally came off the oscillator. She went on the CPAP again and from there she went to the vapo therm.

At her one month cranial ultrasound it revealed one large cyst on the right side of her brain. A week later a smaller one on the same side popped up. The effects of a cyst on the brain are usually cerebral palsy.

When I looked at her I wasnt sure how my precious baby could possibly have CP??? But thats what God has given us to deal with so we will deal with it if it happens.

Thankfully, the last MRI she had before she went home revealed that the large cyst had shrunk to 7mm and the second one had disappeared.

The next hurdle in the NICU was her PDA. However they were lucky because before Brielle came home it closed so no surgery was required. She ended up needing laser eye surgery because of how quickly her ROP (retinopathy of prematurity) progressed. Only a week after coming home Brielle was cleared as having “normal” newborn eyes. 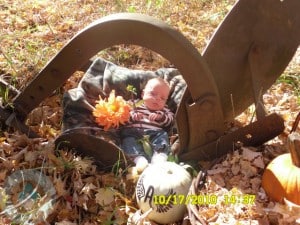 Brielle spent exactly 3 months in the NICU and came home September 1 2010. She came home on oxygen and with a monitor.

Mom and dad were just getting adjusted to having Brielle at home.

They were on their way to grandmas house and had just pulled into the driveway when her alarms started going off. Amanda glanced at it and noticed her heartrate was dropping very rapidly. She took Brielle out of the carseat and tried to stimulate her, but her  heartrate continued to fall to the 60s.

Josh took her and yelled for his dad to call 911 as ran into the house and started performing CPR.

The dispatcher helped us through the CPR. We had just gotten trained a week before! I was watching my husband giving her breaths and compressions and all I could think was “God why are you taking another one from me????” I heard sirens and walked outside and as soon as the first officer walked in the door my father in law yelled “Amber, shes breathing!” It was music to my ears!!!!

Mom went back in and Brielle was fussing a little bit.

Seeing her so blue and lifeless to being fussy and pouty was the best thing!

Brielle was taken back to the hospital that they had just spent three months in. She was only supposed to be there for one night but stopped breathing again so they restarted her caffeine and kept her for five days.

As of right now it is too early to really know if there are any effects from her prematurity. Mom says that Brielle is starting to act like a newborn.

She is 5 months adjusted age. She will focus on objects and sounds and likes to hold her head up. She is starting to sleep later in the night! She is definately a miracle! She is a fighter! Thats what got her through this all!

I asked Amber to give one piece of advice for a new preemie parent. She said:

Be patient and be an advocate for your child. Be there as much as you can! They thrive from the LOVE! Do not compare your child to other NICU babies! They are all so different!!

I asked Amber to describe Brielle in one word and she said: FIGHTER

If you would like to follow Brielle’s journey you can go to Josh and Amber’s Miracle: Miss. Brielle