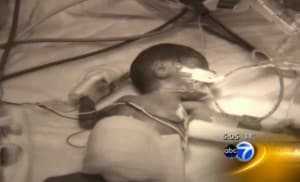 Manuel Hernandez was born premature and with a rare condition where most of his vital organs were outside the body. But the fighter has won a hard battle for survival and is now finally going home.

Manuel was born in Edwards Hospital in suburban Napeville to Angie Hernandez and Wilbert Pena. He was 15 weeks premature and born with a rare condition where his stomach, liver and intestine were outside his body. This condition is called as gastrochisis and occurs in one out of 5000 births.

When doctors saw Manuel’s condition they gave him very low chances of survival but after 6 and a half months of intensive care, the baby is ready to leave the hospital.

“We’re super excited to have him out of the hospital,” said dad Wilbert Pena. 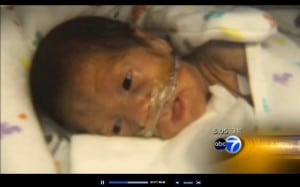 Manuel was just 1 pound 4 ounces when he was born and is really a miracle story as he is one of the very few premature babies born in the US with this condition who have survived.

Nurse Tina Lambert who took care of Manual right from the start says, “”I have taken care of babies like this before but nothing as small as he was.”

Doctors especially had difficulty with the baby because he had many other medical problems. Due to prolonged IV use he had liver problems and needed treatment with a drug from Germany that required special FDA license. Finally after seven weeks when the drug was finally administered to Manuel, it helped his liver recover. 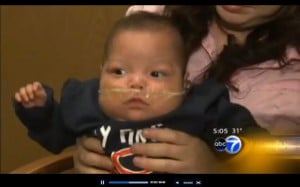 Doctors also performed seven surgeries on the fragile baby as nine consulting physicians and specialists looked after him.

The born-fighter though made constant progress and doctors ensure that his short and long-term prognosis is good.

“He is still at risk,” said neonatologist Deanna Duray. “There is still an opportunity with aggressive therapy, a lot of eyes watching him as an outpatient, to have a very normal life.”

Manuel will be going home to his parents and grandparents who hope he has a bright and healthy future. – Atula, Staff Writer